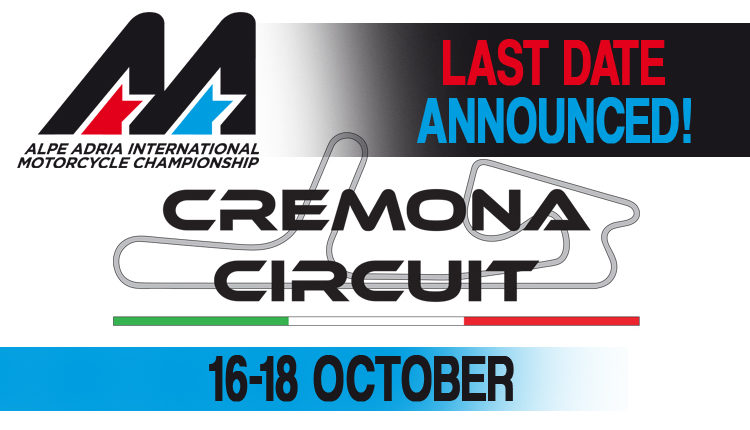 The last round of the AAIC 2020 season will be held over the weekend of 16th-18th October on the Cremona circuit (Italy). The official agreement between the circuit and the promoter came after the AA meeting held in Vienna between the leaders of the participating federations.
An important news for the circuit of Cremona that will be ”baptized” in the competitions world by a prestigious international race that will offer three categories with continental titles.

The racetrack is working to meet all the safety requirements of the federation and has enthusiastically taken up this important new challenge.
A decision aimed to launch the circuit at an international level which will complete the adaptation works within the next few months, just in time to bring the Alpe Adria International Championship back to Italy and probably be the scene of the awarding of continental titles Superstock 1000, Supersport 300 and Supermono.

An important news also for the national motorsport that from this year will no longer be able to count on the Franciacorta track, after having had to do without the prestigious Monza circuit during recent years.
A project embraced by the motorcycle accessories e-commerce platform www.4biker.it which will be the title sponsor of the event and which will also deal with the pre-sale of tickets.

The track that rises in San Martino del Lago (a few km from Cremona) is very technical and with a straight of almost 1 km which is well suited to host an international championship such as Alpe Adria. A 3450mt – long circuit with a counterclockwise direction of travel with wide curve radii, on which the participating pilots will be able to express themselves to the maximum and exploit the power of their vehicles.

The last round of the Alpe Adria season will also be the scene of numerous collateral events, shows, rallies, open paddocks and pitwalks, but above all spectacular races will be the SH Group proposal for motorcycling enthusiasts in central and northern Italy.

A way of experiencing races in an interactive way, with the possibility of interact with international level riders, many of whom with important world-championship experiences and many who will be protagonists in the coming years. We can expect a large participation also from the patrol of Italian riders, who are looking with interest at this new management of this continental championship, born about twenty years ago in Italy and today a point of reference for motorcycling in Mittle Europe.

THE TECHNICAL REGULATIONS ARE ONLINE!