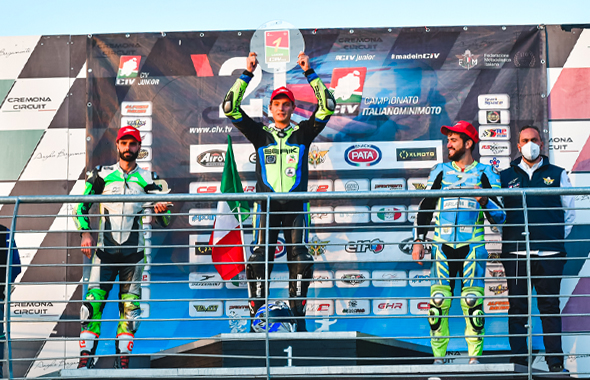 The last stage of the Championship in Cremona confirmed the rookie as the new champion.  Capozzi and Rosetti are now respectively second and third.

TESTS
The last race weekend begins with the usual first free practice session shortly after dawn, with a very cold track and therefore not very useful for making contact with the riders on a new track for many of them. Then FP2 and FP3 were luckily more … friendly.
The first qualifications at 15.00 see Alessio Salaroli in provisional pole, followed by Loris Capozzi and Luca Rosetti. In subsequent qualifying, confidence increases and times drop, except for Sa-laroli who is unable to improve. The combined starting grid therefore sees Loris Capozzi in Pole Position, followed by Salaroli, Cimatti, D’Ambrosio (Wild Card), Rosetti (these first 5 enclosed in just 12 hundredths of a second (!!!), then Lo Iacono, Borsetto and Zaramella, who had not taken part in any of the previous tests, to concentrate above all on the challenge that sees him vying for the Italian title in the Minimoto Open B category.

RACE 1
In race 1, excellent starting point for pole-man Loris Capozzi, but also for Cristian Cimatti who started from third place. Alessio Salaroli manages to protect the third position inside turn 2 from the attack of Luca Rosetti. Halfway through the first lap, Salaroli immediately manages to grab the second position and sets off in pursuit of Capozzi. Negative start, however, for the wild card Michael D’Ambrosio who initially loses two positions compared to the fourth place at the start, but then manages to recover one against Marco Lo Iacono. Luca Borsetto was more delayed, who struggled to find the right confidence with his NK-E / R during this race weekend.
Rosetti passes Cimatti and manages to close the gap from the leading pair, with Salaroli who prefers not to take risks and study the opponent in front of him. Further behind, D’Ambrosio also overtakes Cimatti (in pain from a bad fall in qualifying) and returns to fourth position. On the last lap, Salaroli attacks in turn 4 and overtakes Capozzi, who manages to remain attacked to make a last attempt on Salaroli at the last corner, who still manages to close the door and win, also winning the title of Champion 2021 of the FMI ThunderVolt trophy. Rosetti, taking advantage of the tussle between the two, finds a more favorable line than Capozzi and manages to steal the second position from him right on the finish line. Cimatti follows detachedly, who manages to regain fourth position on D’Ambrosio, then Lo Iacono and Borsetto.

RACE 2
In race 2 it is Capozzi who has to defend his second position in the championship from Rosetti, but the latter stumbles, together with D’Ambrosio, in an early start that excludes him at the start of the fight, due to the 10-second penalty that will follow. D’Ambrosio instinctively closes the accelerator after the jump start, while Rosetti decides to keep everyone open and parade, arriving at the first corner in front of Capozzi and Salaroli. Behind them, Cimatti finds himself in fourth position, ahead of Lo Iacono, D’Ambrosio and Zaramella, who has just graduated from Italian Minimoto Open B Champion. The Borsetto group closes, improving, but still with problems of feeling with the bike. In the first lap D’Ambrosio gains the position on Lo Iacono who accuses a problem with his bike and a few moments later Capozzi also overtakes Rosetti, gaining the lead of the race. D’ambrosio also surpasses Cimatti and in a short time reaches the leading trio. Salaroli passes Rossetti, gaining the second position, then D’Ambrosio also passes Rosetti in third position. Salaroli also passes Capozzi, conquering the lead of the race and in the meantime D’Ambrosio saves himself in extremis from the loss of the rear, however, allowing Rosetti to recover the third position on the penultimate lap.
At the last lap Capozzi tries the attack in curve 4, but Salaroli closes the door. At the last corner Capozzi’s attack is repeated as in the failed attempt in race 1, but this time he manages to completely flank Salaroli and take the victory. Rosetti, on the other hand, manages to keep his distance from D’Ambrosio, finishing third at the finish line, but the penalty for an early start makes both of them relegate to sixth and seventh position respectively. The podium is then completed by Cimatti (extremely competitive up to a couple of outings on the grass), followed by Lo Iacono who brings his NK-E / R, which has performance problems, to the finish line, ahead of Zaramella and Borsetto.

“It has been a tough and difficult year and arriving and winning straight away as a rookie is never easy.
These are difficult bikes because not hearing the sound of the engine, you have a hard time figuring out exactly how much speed you are taking on corners. Plus you feel everything else around you and it is not easy to get used to these unique sensations. The races are always very fun and tight because the bikes are all the same, so in this Championship the rider does a lot. “The words of the young Alessio Salaroli, champion at the debut.