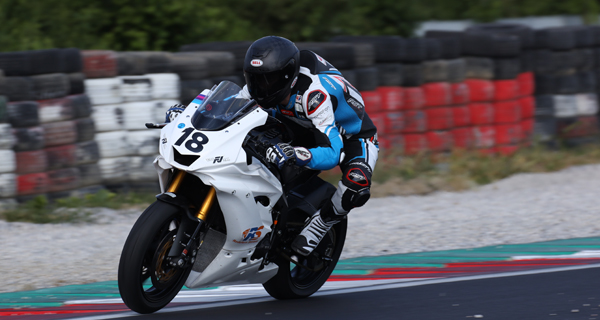 ALEX MURLEY: FROM THE WSSP TO THE MOTOESTATE

The MotoEstate Trophies published an interview with Alex Murley: a former WSSP rider who chose the MES Trophies last year. He talked about his life and his journey and experiences  within motorsport.

Last season was a good one for the young English rider. The video-graph born in Birmingham joined the MES Trophies only during the second round held on the Cremona Circuit at the end of May. And since that moment he had been improving more and more: the very good results he achieved, allowed him to end the season in the second position in the 600 Stock category “Italy and the MotoEstate 2021 represented the beginning and the end of a circle. I got back to track thanks to them “.

But let’s take a step back and return to British soil: there, where it all began… “I was three years old and I was already in love with motorsport. At that age I could easily sit on my dad’s knee watching an F1 GP on TV and recognize every single rider on the starting grid. As a kid I wanted to get a Kart license, I loved four wheels. But then, a friend from primary school whose family was Sicilian took me to try a minimoto. We had just seen the WSBK at Silverstone. It was 2010 and back then a great love blossomed: that for motorbikes “.

From that moment on the minimoto, Alex begins to achieve great results: he won the Kawasaki Junior Cup in 2014. Then he joined the European Cup the following year and in 2017 made his debut in the SS300 World Championship “The experience in the SS300 World Championship meant everything to me. We achieved some very good results managing to score points during all the races that I finished and at the end of the year we finished in the top 20: I was the first among all the British riders. Then the following year I had to leave the team mid-season. The results were not coming and in the World Cup, if you are not in a top team, it is difficult to be near front. At that point I needed to surround myself with people who truly believed in me and supported me. It was a great luck to find the Lorini Honda Team who gave me the opportunity to restart and take another step forward. With them I made my debut with the bigger bikes and in the best possible stage: the SS600 World Championship. Despite having only been able to run a few races – explains Alex – we got some good results. Especially in Qatar: P4. It was a great experience”.

After the WSBK, some dark times: the Covid-19 pandemic forced Alex to stop racing; but even in the darkest time a light may be turned on: and this is what happened with the MES Trophies and thre Project #109.

“I made my debut in the MES in Cremona at the end of May. It was the second round. It was about February when I got an Instagram message from Bradley Smith. I could not believe it. I was watching that Bradley Smith racing in MotoGP and at that moment I saw him in my direct messages. Bradley knew my history in the World Championship – Alex explains – and trying to start a new collaboration with his new coaching project # 109, in partnership with Claudio Corti. I did not think it twice. Having two former MotoGP coaches is a real dream. We got to work right away. We weren’t able to set up everything for the first stage in Varano and we had to wait until May. But it didn’t matter: I was ready to get back where I belong to”.

MES, what a passion in the paddock

“When I got in Cremona I did not know anybody. I didn’t even speak a word of Italian (now Ales is learning the language). The first thing that struck me was the passion of the riders and professionals in the paddock. Passion for motorcycles, for being together. A huge atmosphere “.

Then he got back on track … “I hadn’t rode a bike for more than 19 months and it wasn’t easy to find the feeling. Another feature of the MES Trophies that impressed me was the level of the riders. Especially in the first positions they were very fast. Look at Simone Saltarelli: he is near front in the MotoEstate and in the CIV. Getting used to the new circuits wasn’t that easy either. The layout of the MES tracks reminded me a lot that of the English tracks. It was pretty challenging to me. I had to adapt my driving style, but thanks to of Claudio and Bardley’s advise I started to improve and get good results“.

Good results that allowed Alex to finish sixth in the overall ranking and just two points from the first place in the Stock 600 “It has been an incredible season. After the Cremona race I was really happy. Being away from the bike for so long and having to start from scratch was a great challenge. However, proving to be competitive has paid off any effort. I always knew I could be fast and I never gave it up. Without the help of all the guys in Team # 109, however, I could not have done it: thanks to Italy and the MotoEstate I feel alive. Now the circle is closed ”.

Now Alex doesn’t want to stop anymore… “I will certainly continue my adventure with Project # 109. My goal is to return to the WSBK, but we need to be clever, I cannot make mistakes anymore. I will probably not race in the MES in 2022 but I will certainly come by to say CIAO ”.

Registration for MES 2022 are already open. You can find all the information here.