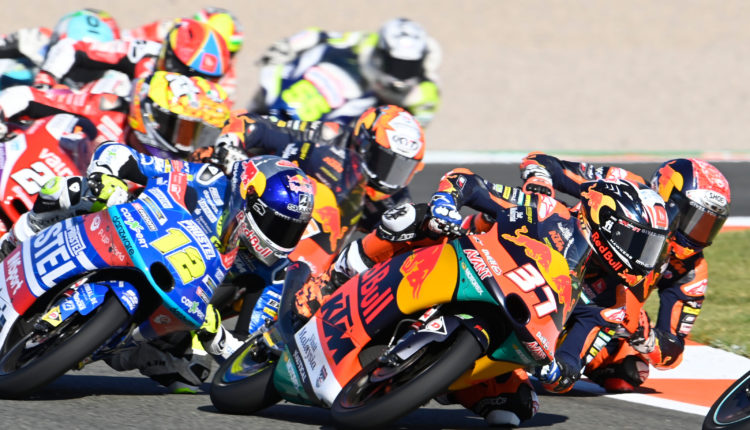 It has been a truly incredible 2021 racing season for the Red Bull MotoGP Rookies Cup. Not only did we have the most amazing track action but we watched Pedro Acosta jump straight from 2020 Rookies Champion to 2021 World Champion on the Moto3 KTM.

Acosta was a great Rookies champion, a real thinker and it was no surprise that he succeeded in his move up into the World Championship. But the way he did it, finishing 2nd in the opening round, then winning the next 3 races for the Red Bull KTM Ajo team, was truly sensational.

There are 8 Rookies stepping up from the Cup to the Moto3 2022 World Championship making a total of 19 Alumni in that class on the provisional entry list of 30.

That will bring the total number of Rookies who have taken the step into the GPs to 98, which is 49.25% of all graduates.

So who is favourite for World Championship success in 2022? Toprak will defend his title in Superbikes while Pedro Acosta moves to Moto2 leaving Moto3 open for other Rookie graduates as they fill almost 2/3 the grid.

Taking Acosta’s place in the Ajo KTM team is Daniel Holgado and though the 16-year-old Spaniard was 3rd in the Rookies Cup for 2021, scoring 2 victories to add to his single 2020 win, he did end the season on top of the CEV Moto3 Junior World Championship table. Holgado was perhaps a touch unlucky in Rookies Cup and certainly exceeding track limits cost him dear. He should impress once he settles in to GP life alongside Ajo teammate and fellow ex Rookie Jaume Masiá. Just ahead of him in the Rookies points was David Muñoz and the 15-year-old Spaniard is also in Moto3 for the coming season. His speed is certainly not in doubt, a touch more self control and the 4 times Rookies winner will be on the GP podium. To achieve that, Muñoz is going to be racing against some other familiar faces, Brazilian Diogo Moreira, Briton Scott Ogden, Italian Matteo Bertelle, Indonesian Mario Aji, Japanese Taiyo Furusato and a 3rd Spaniard Ivan Ortolá.

Progress is rarely linear and unlike Acosta most will not find instant GP glory. Furusato found instant Rookies success with a Mugello Rookies debut win, Bertelle made determined Rookies progress and gained a win in his 3rd season. Rookies Cup winner David Alonso isn’t jumping straight into the Moto3 World Championship. The 15-year-old Spaniard will gain more experience in the Junior World Championship and is planning some GP rides during the year. That should make him the 99th Rookie to start in GPs. He, like Acosta, is an ever improving thinker.