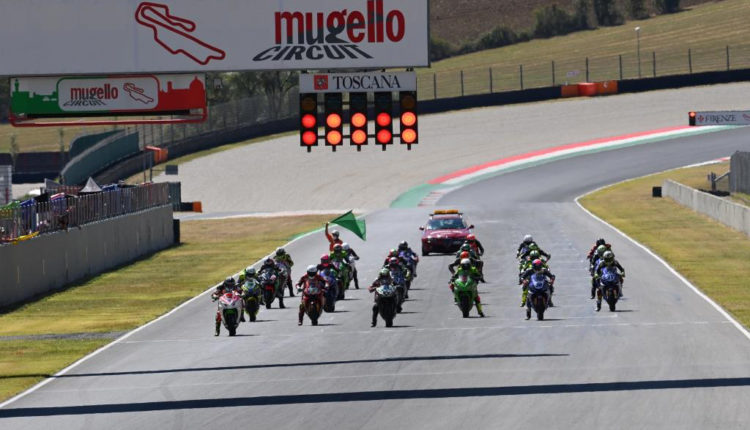 A spectacular round at the Mugello Circuit archives the second edition of the Women’s European Cup. Once again Beatriz Neila Santos is crowned Champion, repeating her success in 2020 thanks to second place on the finish line, although with some more difficulties: In fact, only one point divides the spanish of the Yamaha Trasimeno Team from her compatriot Sara Sanchéz in the general classification, with the two who had arrived at the Tuscan Autodrome with a gap of 7 points and intent on fighting for the title in the last delicate challenge.

For the rider of the CM Racing Kawasaki team, the victory with an additional point assigned to the author of the fastest lap of the heat was not enough; fatal for her was having missed the pole position, through which she would have won the title with equal points by virtue of her placements.

The final score reads 158 to 157 in favor of the rival. The two athletes have been the protagonists of a sensational and very hard-fought season: they have always climbed on the podium sharing six wins in seven rounds. With 3 victories each, it was in fact the extra points for pole position and fastest lap in the race to reward Neila Santos. “I’m really glad I won the title again this year. It was not an easy weekend, but I managed to find a good feeling that allowed me to fight for the top positions. I just thought not to take too many risks and to preserve the second position, which was enough to become champion. I can only thank all those who allowed us to live a year at a high level” the first words of the Champion at the end of the race, that
also gave a real moment of fairplay consoling a disappointed Sara Sanchéz in tears towards the road to the press room.

Roberta Ponziani is confirmed in third place with 90 total points, the only one able to worry the leading duo and perhaps paying a few mistakes too many. For the E&E Kawasaki Team rider there was a victory in the inaugural stage at Mugello, four third places and pole position in the final match, which unfortunately ended in the gravel on Sunday. Sara Cabrini reaches fourth place overall in the last round, thanks to the third step of the podium which represents her best result of the season. A beautiful fairy tale for the young girl, considering that her participation was in danger up to a few hours from the start due internal disagreements of the team; The Trasimeno team welcomed her in its structure offend a Yamaha R3, motorcycle unknown to the rider who until then had driven Kawasaki.

Thanks to third place, Cabrini reached 77, trailing the fierce Chilean opponent Isis Carreno (Team Kasawaki GP-3) by one point in the standings. The 2020 vice-champion of the Kawasaki Gradara Corse Team Sabrina Della Manna finished an undertone season in sixth place with 62 points, with the only podium represented by third place at Misano 1. The Russian Masha Medvedeva of the Yamaha Rosso&Nero Team follows with 53 points, who unfortunately missed the podium in the last round due to a crash. Eighth place for Martina Guarino at 41 (Yamaha MotoXracing Team) on a par with Monica Robotta (Kawasaki Val Susa Racing Team). Alice Solcati concludes the top ten with 40 points, 11th Martina Plenario with 35.

Two protagonists of the last edition were instead victims of injuries that affected their performance: Aurelia Cruciani (Yamaha BRT Team) is only 12th at the end of the year with 31 points after injuring her ankle during winter preparation and her shoulder in the bad accident in Croatia (where however she signed the best lap in the race) while Alexandra Pelikánová (Yamaha MotoXracing Team) was unable to recover from the crash in the first race at Mugello, right where she signed the pole position.

Women’s European Cup thus closes a season that has confirmed the growth and interest to “pink” wheels, thanks to the enormous work of the organizers, the FMI, the FIM Europe and all the Partners who, despite the difficulties due to the pandemic, managed to raise the level and attract the attention of the entire motorsport  environment.

28 girls from 10 countries and 4 different continents have performed in the seven races of the year; the night race at the Misano World Circuit (which brought racing back under the starry sky after more than 30 years) and the two Rounds in Grobnik on the historic Rijeka circuit remain unforgettable.