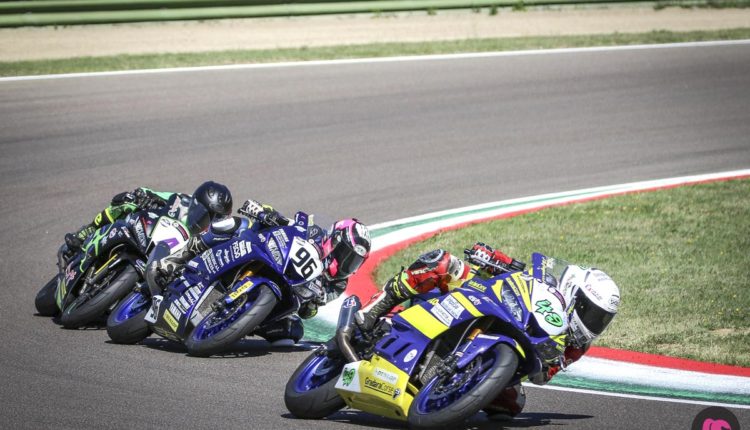 The Mugello racetrack turns pink for the last decisive chapter of the 2021 Women’s European Cup Technical Service Grand Prix. The Tuscan circuit will host the final round of the women’s trophy on the weekend of 27/29 August, decisive for crowning the winner of the edition. An all-Spanish affair, with the two rivals fighting for the crown Beatriz Neila Santos and Sara Sanchéz divided by just 7 lengths in the standings, in favor of the first.

The athlete of the team Yamaha Trasimeno, already Champion 2020, showed an overwhelming superiority in the past round 6 of Misano, where in the spectacular night setting has managed to conquer pole-position, victory and fast lap of the race, finishing the weekend with full score. For its part, Sanchéz surprised in the opening round, showing a special confidence with the track of Scarperia and San Piero, obtaining on its absolute debut the second place on Saturday and the victory the next day with the best-lap of the heat.

The two compatriots, able to divide up 5 of the 6 races so far disputed and with an incredible path that has always seen them on the podium, will be presented at the weekend with different moods but that do not spare pressure; If the leader will be forced to avoid making mistakes trying to administer the small advantage, the rider of Kawasaki CM Racing Team should rather try to attack from the first sessions to mend the gap and aim for recovery. For Roberta Ponziani, with the chances for title now vanished, all that remains is to aim for a good performance on the track where she took the only victory of the season in the first race of the year; with a 24-point advantage over her pursuers, the E&E Racing Kawasaki Team rider is expected to finish third for this edition as well. Instead, the fight for fourt position is more heated, with Isis Carreno (Team Kawasaki GP-3) and Sara Cabrini only 4 points away, and from whom we expect yet another duel full of overtaking, as is now customary.

Two further international wild cards will also enrich the thick starting grid: the South African Jessica Howden, who will take to the track with the KTM of Team Cherrybox24-Guandalini Racing, and the Polish Patrycja Sowa to represent the colors of Team Balaz Kawasaki.

Unfortunately, public access is not allowed due to the restrictions due to the pandemic: it will still be possible to follow the girls results on our website.