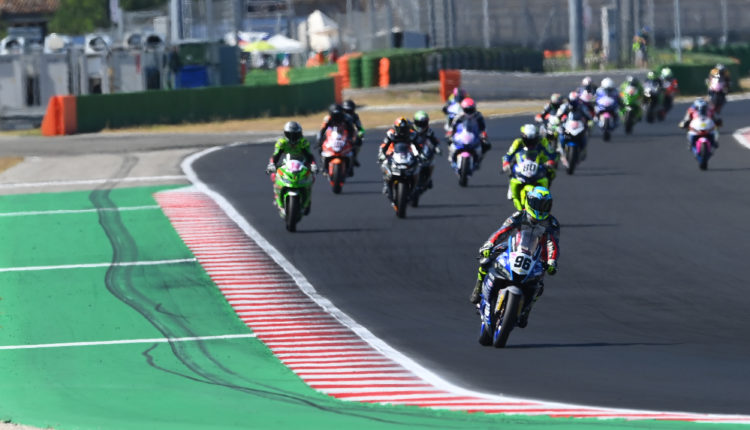 Sara Sanchez took pole, victory and set the fastest lap at the Misano World Circuit “Marco Simoncelli” in dominating fashion. The Kawasaki rider from the WithU 511 Racing Team closed the gap on rival Beatriz Neila Santos (Team Trasimeno, Yamaha), who saw her sweeping 18-point advantage decrease to four points. The current championship leader faced a challenging round in Italy, failing to secure a front row start and improve her starting position in the race. An excellent Roberta Ponziani (MotoXRacing, Yamaha) climbs back on the podium, second in qualifying and in the race, ahead of Josephine Bruno (Gradara Corse, Yamaha), who started from the front row.

After her success in the sprint in Race-2 in Rijeka, Sara Sanchez keeps building momentum. The Spaniard showcased an umatchable pace fast since the beginning of the weekend, shining in qualifying with a mighty 1’52” 517 in qualifying, which drove her to hersecond pole position of the season. In the race, despite an excellent start by Bruno, Sanchez soon regained the lead and opened a wide gap on her rivals thanks to her consistency with the pace on 1’52’’ throughout the 10-lap race.

Behind her, Ponziani, Bruno and Neila Santos engaged in a fiery battle for the podium. In the closing stages, the Iberian considerably lost ground against the two Italian riders, separated by just 42 thousandths at the finish line. Isis Carreño (Team GP3 by AD 11, Kawasaki) ended the race in the Top-5, confirming her excellent progression, especially following the podium finish conquered in Race-1 at Grobnik. Aurelia Cruciani enjoyed an encouraging P6 at her debut with the Roc’n’DeA team, recovering from eighth to sixth on her Yamaha. Flavia Lucchetti (Racestar, Yamaha) also ends on a high, from 9th on the grid to 7th ahead of Ran Yochay (Team Runner Bike, Yamaha )and Martina Guarino (Franchini Corse, Kawasaki). Sara Cabrini (Team
Trasimeno, Yamaha) faced a complicated race, dropping from fifth position on the grid to tenth final position at the end of the race on the Romagna track.

All eyes are now on the season finale on the weekend of 17-18 September at the Mugello Circuit, where the champion of the third edition of the Women’s European Cup will be crowned.