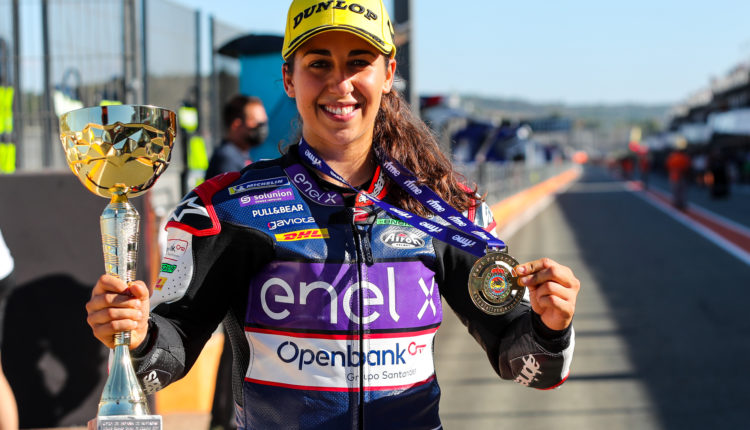 The sixth round of the Spanish Superbike Championship was held at the Ricardo Tormo Circuit this weekend.
Unai Orradre, when there are still 75 points to play, is already Open600 champion of Spain and Jordi Torres took the leadership of SBK from Ivo Lopes, who had held it since the beginning of the season. In addition, both in Moto4, PreMoto3 and SBK Junior, there were super exciting races that were repeated on Sunday

Ivo Lopes regains the leadership of SBK
Markus Reiterberger was the protagonist of this race, riding in the lead and setting a great rhythm during all the laps. The German raced this weekend as a Dunlop test driver and left ESBK with a very good feeling and impression of the Championship. Behind Markus, Jordi was second, but halfway through the race, he crashed. In this way, Oscar Gutiérrez and Ivo Lopes have been in charge of fighting to win at SBK. Closing all the gaps and maintaining concentration, the SP57 Racing Team has achieved his first victory in the top flight. Lopes finished second, thus recovering the leadership of the same and taking the Peris Leader Badge. Alejandro Medina has closed the photography of winners.
In Open1000 they have been on the podium, along with Reiterberger, Alex Toledo and Dani Sáez.

Aleix Viu wins in Supersport with a sprint race
The Supersport race has been very bumpy as two red flags have been raised due to crashes in which some bikes have stayed on the track, there has been oil, etc. Following the regulations, the final was played over 6 laps so the drivers had to give their all from the start. Aleix Viu had things clear and has started with everything to win and take a double from Valencia. Behind him he had Unai Orradre who, being already champion of Spain, was not going to take any risk either.
The positions have not changed and, thus, the Easy Race has won, Borja Gómez has been second maintaining the Peris Leader Plate, and Ondrej Vostatek has closed the top three. At Open600, Unai Orradre, Corentin Perolari and Mauro González have risen to the drawers of honor.

Álvaro Díaz extends his advantage in SBK Júnior
SBK Junior has once again been a group race where the position changes have been constant. With five laps to go, Álvaro Díaz has distanced himself from the others because he knew he had more rhythm and winning at home was an extra motivation. He has achieved it by taking a double that brings him closer to achieving the 2021 title. With Álvaro, Eric Fernández and Yeray Ruiz have been on the podium.
In the Yamaha YZ bLU cRU Cup, Álvaro Díaz, Yeray Ruiz and Javier Corral have climbed to the honor boxes and in the Kawasaki Ninja Spirit Trophy Eric Fernández, Pepe Osuna and Borja Jiménez.

María Herrera and Gaelle Remy, Spanish Women’s SBK Champions
María Herrera dominated the entire race with a firm hand, lowering her times from yesterday and finishing very happy. Thus, she has been proclaimed champion of Spain of the Women’s SBK 600. The surprise has jumped with the fall of Pakita Ruiz that has left her out of the game in the first bars. With this, Andrea Sibaja has been second and has taken the silver medal and Olga Shaternikova has closed the top three.
In SBK Women 1000 Gaelle Remy is the new champion of Spain in this category, Natacha Remy runner-up and María Calero, third.
Next week, at the Circuito de Jerez Ángel Nieto, the 2021 Spanish Superbike Championship will be closed and all the titles that are still up for grabs will be resolved.