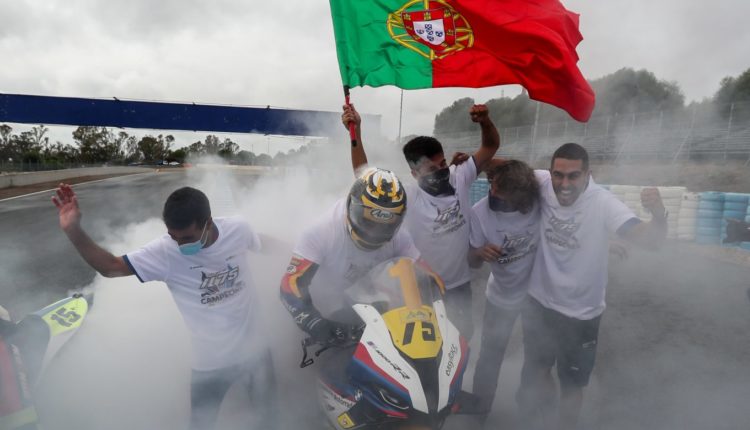 The curtain fell on the 2021 Spain Superbike Championship. It was truly a spectacular season, with exciting races and riders from over 28 countries giving their all during each round.

Jerez proclaimed four champions on Saturday, a day when the rain wanted to be the real protagonist: Borja Gómez in Supersport, Álvaro Díaz in SBK Júnior, Alex Longarela in Moto4 and Jesús Ríos in Promo3. On Sunday, however, the remaining titles were resolved: in Superbike, Open1000 and PreMoto3.

Gutiérrez had a double win but it’s  Lopes the new champion
Óscar Gutiérrez repeated the Superbike victory obtained on Saturday after leading the group during all the race laps. That of the SP57 Racing Team was a spectacular weekend. Behind him, Naomichi Uramoto and Román Ramos completed the podium.
The real battle in this category, however, was that between Ivo Lopes and Jordi Torres, with tire choice being the real key. Both changed them on the same grid and by qualifying sixth, the BMW EasyRace Team rider was crowned the new Spanish Superbike champion.
In Open1000 Christian Palomares was able to race with the SBK riders in the top positions, thus winning the title of champion.
In this way, Ivo Lopes collected the gold medal, Jordi Torres the silver and Óscar Gutiérrez the bronze. In Open1000 the protagonists were Christian Palomares, Dani Sáez and Ville Valtonen.

In Supersport the champion Borja Gómez closed the season with another win
Borja Gómez and Miquel Pons battled to win in Supersport. There was a fight from the start. With 6 laps to go, however, the race was stopped with a red flag due to the crash of a driver. Borja Gomez thus climbed to the top step of the podium, followed by Miquel Pnsi and Pedro Nuno Romero.
In Open600 Corantin Perolari, Unai Orradre and Mauro González took the podium.

Pepe Osuna won in SBK Júnior
The SBK Junior race was interrupted by a red flag on the first lap due to the crash of several riders. Therefore, the young talents only had 8 laps to demonstrate their potential. Pepe Osuna has always proved to be the strongest and, although Álvaro Díaz tried to follow him, this made the furrow and once again climbed to the top step of the podium. At the finish line, with the checkered flag waving, Julio García took third place after a mistake by Adrián Rodríguez that confused the starting line with the finish line.
Álvaro Fuertes, PreMoto3 champion
The Moto4 race was very tense with the track in complicated conditions due to the rain. Beñat Fernández, Alex Longarela, Iaroslav Karpushin, until his fall, Izan Rodríguez and Enzo Hoarau, were the protagonists of the fight for victory. They have swapped positions countless times, with Beñat managing to come out the winner, followed by Izan and Enzo.
Alex Longarela, Beñat Fernández and Pedro Alomar received gold, silver and bronze medals for their great season.

As happened on Saturday, Marco García dominated the PreMoto3 race from start to finish with a 33-second advantage over Álvaro Fuertes, who, however, only needed second place to win the category title.

The medals in PreMoto3 were for Álvaro Fuertes, Marco García and Pablo Gutiérrez, while in Promo3 for Jesús Ríos, David González and Xavi Vidal.

Thus ends a spectacular season full of twists. We just have to look forward to next year. On the weekend of March 31st, April 1st, 2nd and 3rd, we will return to Jerez for a new, exciting edition. Can’t wait!

HUSQVARNA SVARTPILEN 701 2018: HERE COMES THE CARBON EXHAUST THAT MAKES ALL THE DIFFERENCE

ALPE ADRIA 2021: IT ALL ENDED IN CREMONA