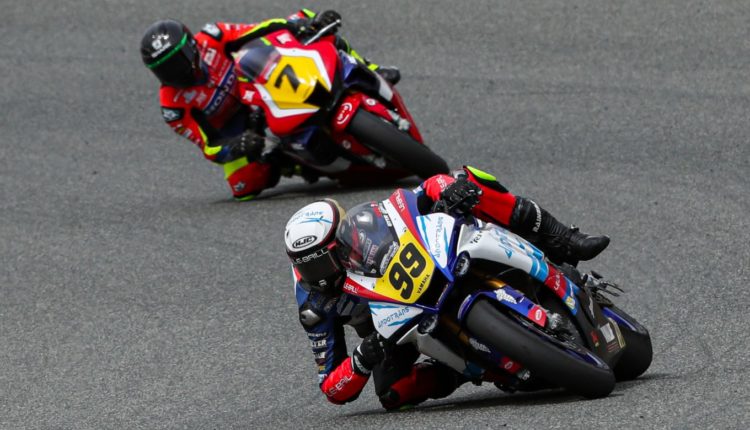 The Jerez Ángel Nieto circuit hosted the first round of the 2022 Spanish Superbike Championship. As expected, the event offered spectacular races that made the stands of the Andalusian circuit vibrate.

On Saturday the winners were Óscar Gutiérrez, Aleix Viu, Julio García, David González, Nikola Miroslavov and Carlos Blanco. On Sunday there were again exciting races and many fans in the stands, who fully enjoyed this ESBK debut.

In addition, the whole day was broadcast live on RFME’s YouTube channel and, for the first time ever, the ESBK and ESBK junior races were also broadcast on Teledeporte and RTVE Play.

SBK: Spectacular race won by Óscar Gutiérrez
Óscar Gutiérrez and Maxi Scheib played the leading roles in an epic Superbike duel, fighting for the duration of the race. The Chilean was in the lead most of the time, but Óscar had an ace up his sleeve which he used in the final stages. 4 laps from the checkered flag. Gutierrez overcame his opponent and won the duel, as well as claiming the number one title for this 2022. With Gutiérrez first and Scheib second, Tito Rabat, who raced practically alone for the entire race, finished third. Ville Valtonen was the best of the Stock1000, Dani Sáez finished second and Mathias Poulsen third.

Aleix Viu, leader in Supersport NG
Aleix Viu dominated the Supersport NG race. He raced alone, setting a great pace that was impossible for his opponents to keep up and managed to score a double at Jerez and thus bring home the Peris Leader Plate. Behind gave birth to a great battle Yeray Ruiz and Meikon Kawakami. Eric Fernández also had a great race but, with five laps to go, he crashed and was out of the game. In the end, Yeray won and preceded his teammate across the finish line.
In Stock600 Kimi Patova, Brett Roberts and Jared Schultz took the podium

Moto4 victory goes to Drummers; in PreMoto3 González triumphs
Spectacular Moto4 race with three riders fighting for victory. Nikola Miroslavov, Izan Rodríguez and Andrés García were in the lead throughout the race, exchanging the first position and testing the mental strength of the opponents, but in the end, from behind, came Mathias Tamburini who was able to attack in the moment fairer and won the victory in front of Izan Rodríguez and Nikola Miroslavov.

In PreMoto3 David González won the race with authority just like on Saturday. From the first moment he was able to distance himself from the group and concentrated on not making mistakes, he made his triumph never questioned. Behind him, four riders fought against each other for the second step of the podium. Jesús Ríos, Fernando Bujosa, Alex Longarela and Carlos Cano were the protagonists of the brawl. At the last lap of the last pass, Cano crashed. Rios thus made his second position with Longarela third.

Blanco and Montoya, Spanish champions of Handy ESBK
The second race of the Handy ESBK was very demanding. Carlos Blanco won again with authority, taking the title in the 1000cc. Javier Martínez finished second in this category, while Rodrigo Martín, after beating José Antonio Negrín, slipped to third place to take the bronze medal.
In 600cc things remained unchanged from Saturday and Toni Montoya was the best and deservedly crowned champion of 2022. David Guijarro finished second and Jordi Simón third.

Next round of the Spanish Superbike Championship on the Ricardo Tormo Circuit on the weekend of 23 and 24 April.