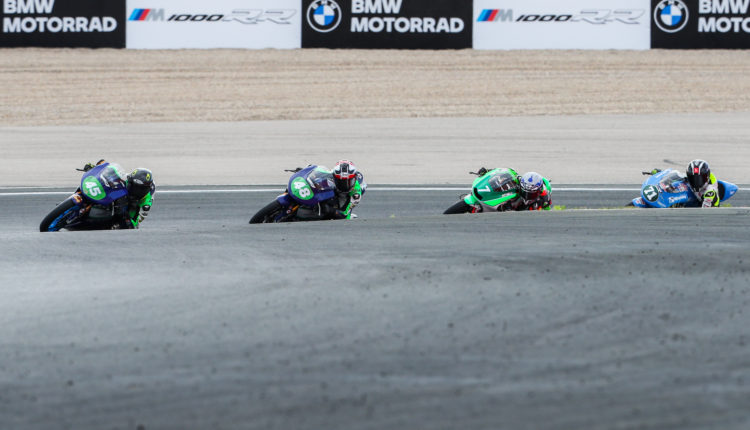 The already world-wide circuit of Navarra has hosted the fifth round of the Spanish Superbike Championship. Today’s day has been lived with great emotion since, at 10.25 in the morning, there was a minute of silence for the recently deceased, Hugo Millán. The Cuna de Campeones rider competed in the ESBK for 3 seasons being runner-up in PreMoto3 in 2019. His father, Kike Millán, has been in Los Arcos and has felt the heat of the entire ESBK since no one has been missing in this I remember what has been done to your son

Ivo Lopes and Jordi Torres have been, once again, in charge of fighting for victory. During the first 7 laps the one from the Easy Race went first but the Team Honda Laglisse one surpassed him to shoot and win. He did not want the same thing to happen to him as yesterday when Lopes stole the victory in the last meters and has given everything to climb to the first step of the podium. Ivo has been lagging behind and, although he finished fourth, he continues with the Peris Leader Badge.

Behind, Alejandro Medina finished third but was overtaken by Carmelo Morales. The surprise was that of Oscar Gutiérrez who, from fifth position, overtook Román Ramos, Medina and then Morales to finish second. Thus, Carmelo has closed the top three.

Unai Orradre has dominated the race with an iron hand. In the first bars there has been a fall in which Alex Ruiz, Loic Arbel and Aleix Viu have been involved. Then it was David Sanchís who was also left out, so those in charge of fighting to win in SSP have been Borja Gómez and Simon Jespersen. The two have rolled very close and with Dani Valle delayed without being able to reach them. The Cardoso Racing driver was in the lead almost every lap, but in the last few meters before the checkered flag, the H43 Team Nobby rider passed it to take his first win of the season. Borja was second, keeping the Peris Leader Badge, and Dani third.

In Open600 Unai has been accompanied on the podium by Ángel Heredia and by Mathias Poulsen.

The career of SBK Junior was also very fought. In all the laps there has been a group of 10 riders exchanging positions and fighting for the only three boxes on the podium. At the beginning, Pepe Osuna and Daniel Mogeda were the protagonists, managing to lead, but later, Eric Fernández and Yeray Ruiz took over to offer a super exciting end of the race. Almost crossing the finish line in parallel, the Speed ​​Racing driver won, Yeray was second and Osuna third.

In the Yamaha bLU cRU Cup they have been in the photography of winners Yeray Ruiz, Álvaro Díaz and Carlos Giménez and in the Kawasaki Ninja Spirit Trophy Eric Fernández, Pepe Osuna and Antonio Torres.

Thanks to the results of its pilots, the Deza Box77 Racing Team has been the winner of the REDD Challenge GS. Andrea Sibaja has collected the award on the podium in Navarra.

Impressive battles in Moto4 and PreMoto3

The Moto4 race was extraordinary with five riders fighting for victory and with many overtaking. Iaroslav Karpushin, Carlos Cano, Andrés García, Alex Longarela who, although he has gone wrong, has managed to recover and get into the fight, and Beñat Fernández have been the protagonists. After endless changes of positions and many nerves between the teams, Karpushin won with a double in Navarra but after going through the technical control, he was disqualified due to anomalies on his motorcycle. Thus, Longarela has been first, Fernández second and Carlos Cano third.

PreMoto3 has not left anyone indifferent either and the race has been spectacular. 7 drivers have been seen to be the best and there have also been many position changes and different leaders. None of them wanted to be left out of the honor drawers and, therefore, the battle has kept the tension until the end. Among the protagonists, Pablo Olivares was out of the game early and Nuno Ribeiro, when he was first, was sanctioned with a Long Lap Penalty for repeatedly exceeding the track limits.

Thus, Marco García has managed to cross the finish line before anyone else and leaves Navarra with two victories, Eitan Gras, who has fought to the end, has been second and Álvaro Fuertes third.

The Promo3 podium has been made up of Jesús Ríos, Adrián Covarrubias and Xavi Vidal and the Cuna de Campeones podium by Vidal himself, Xavier Martínez and Mark Pérez.

NTC, MOOR VS LUCIANO: SPECTACULAR SPIELBERG DUEL ROUNDS OUT THE SEASON IN STYLE