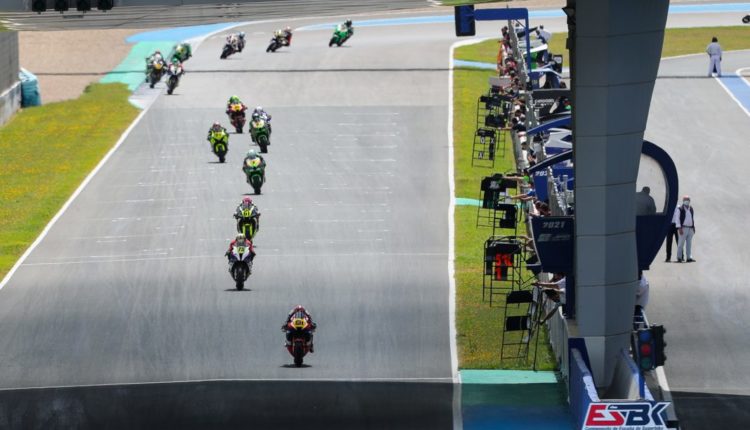 ESBK: EVERYTHING IS READY FOR THE GRAND FINALE

Everything is ready for the seventh and final round of the Spanish Superbike Championship (ESBK), which will be staged this weekend at the Angel Nieto circuit in Jerez.

After the stop in Valencia last week, all categories remain very open, except in the 600 Open where Unai Orrandre is the new champion with 9 victories. On the Andalusian track, we will know the names of the new champions.

Superbike and Supersport: the favorites are Lopes and Gomes
On Saturday in Valencia Jordi Torres took the lead over Ivo Lopes but only for a few hours as, in Sunday’s race, he crashed and ran out of points. This episode was exploited by the BMW Easyrace Team which recovered the first position and presents itself at the last round of the season as the number one favorite.
In Supersport, Borja Gómez is proving to be the strongest driver in the category and this has led him to keep the Peris Leader Badge throughout the year. The Cardoso Racing driver arrives in Jerez 31 points ahead of his main rival, Dani Valle.
In Open1000 Christian Palomares and Dani Sáez will play, separated by only 2 points.

Álvaro Díaz leader of the SBK Júnior
Álvaro Díaz left Valencia with a brace that distances him from Yeray Ruiz in the overall standings of the Championship. Now there are 38 points that separate them and, even if it will be difficult for the Arco Motor University Team to lose the title in this category, anything can happen. In Jerez we will also discover the team that wins the REDD Challenge GS as the best team of 2021 .

The grand finale on two platforms
This was the first year that RFME was able to broadcast all races live through its YouTube channel. With excellent audience numbers and satisfaction from teams and drivers, the grand finale of the season will be visible live on the RFME YouTube channel on Sunday from 10:45 am and exclusively for the last round also on the Sports Channel.

HUSQVARNA SVARTPILEN 701 2018: HERE COMES THE CARBON EXHAUST THAT MAKES ALL THE DIFFERENCE