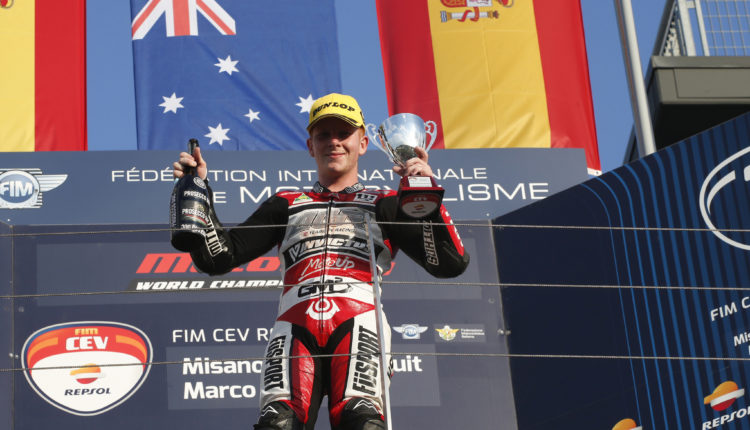 Muñoz fired away from pole position but drifted across to his right before then colliding with Kelso on the run down to Turn 1. The Australian, unbothered by the contact, took the holeshot and quickly put his head down. The number 66’s pace was too hot for many to handle, with only Ortola, Muñoz and Holgado able to go with him.

Further back, Aspar Junior Team’s Scott Ogden was left frustrated after his race ended prematurely following a collision with Avatel Cardoso Racing’s Dani Muñoz. At the front though, it was a leading group of four. As they flicked left for Turn 15 on Lap 4, the rear of Holgado’s GASGAS machine let go and the young Spaniard made his first error of 2021 as he crashed out of the victory fight.

We were left with three at the front and Kelso was quite happy to lead the way. Both Ortola and Muñoz sat and studied the 18-year-old until with three laps to go the fight for victory sparked into life. Muñoz pounced on Ortola at Turn 1 before then being handed the lead as Kelso ran wide at Turn 4.

Ortola, not happy to sit in second behind his compatriot, was able to find an instant response and dived through on the brakes into Turn 8. It would go from bad to worse for Muñoz as Kelso sprung a surprise move at Turn 15 to move up to second. Two laps now left and Kelso was back at the front thanks to brave move at the fast Turn 12.

Kelso started the final lap at the front and for the first half a lap was inch-perfect, until he made a costly error at Turn 10. The Australian went wide and Ortola pounced. The Spaniard was half a lap away from a debut victory and went defensive as a result. However, Kelso was able to magic something up at Turn 12 as he rolled around the outside of Ortola to hit the front and eventually take victory.

Ortola remains in the title fight, now 43 points adrift, after a fifth podium of the year, whilst Muñoz, who eased off on the final lap, now sits 26 behind Holgado thanks to a fourth straight podium. Three men, two races, one title all to be decided at Valencia in two months’ time.

AC Racing Team’s Collin Veijer put in one of the rides of the day to take fourth having started 23rd. Josito Garcia (SIC58 Squadra Corse) clinched fifth, a fraction clear of Luca Lunetta (AC Racing Team) and Zonta Van Den Goorbergh (Team Super B) who both enjoyed career-best finishes in sixth and seventh.

Astra Honda Racing Team’s Mario Aji was only half a second behind Veijer in eighth, before the top ten was rounded out by David Salvador (TM Racing Factory Team) and Josh Whatley (Team MTA).

IRRC: IT ALL ENDED IN FROHBURG