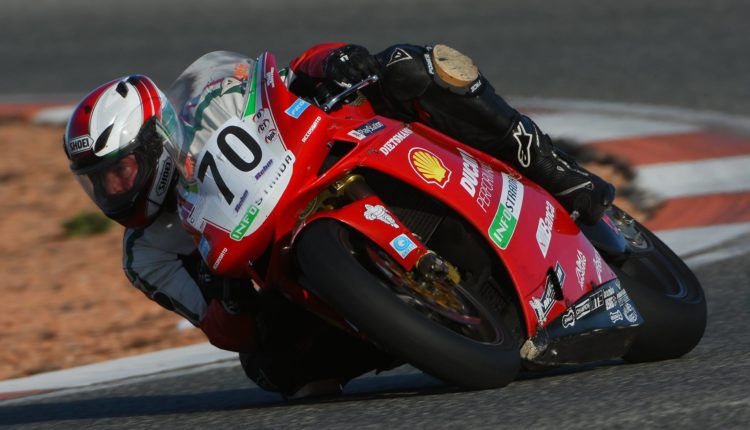 “THE MOTOESTATE SAVED ME. IT WAS THE ONLY CHANCE TO RIDE DURING THE PANDEMIC YEAR”

Gregory Penna is a French driver who began to get passionate about motorsport about ten years ago: “At first I only booked for free practice track days on French circuits. It was more of an attempt to experiment. Then slowly the passion and desire continued to increase and took over the reason. Then the decision: “I have to get more serious about racing” I said to myself. In 2016 I started racing with small bikes in kart circuits. And shortly after I enrolled in the French 25 Power, a championship for motorcycles with less than 25 horsepower. The escalation then continued, thanks to the will and curiosity to know and experience new things that have always characterized me. So when I had the opportunity to meet the president of the French Sport Wheel I didn’t let it go and I signed up for the two-cylinder championship they are used to organizing. “My old Ducati 998, fits just like a glove” I thought. And away with another adventure ”

The pandemic has then upset the plans of many riders and even the French championship was canceled last year if I’m not mistaken? “Unfortunately you are not wrong. They canceled everything. However, it was that closure that opened up other opportunities for me. I saw thanks to the social networks that the Motoestate hosted the BDB grids inside: the Battle of the two-stroke motorbike. Francesco Greco was my main interlocutor and so I came to Varano for a wild card. That opportunity really saved me. It was the only chance to continue racing in a disastrous year like 2020 “.

And how do you judge the experience? “An experience in the true sense of the word. You know at the beginning of a new adventure you are always afraid: “How will I be treated? How will it be?” But then the reality was beautiful. I was welcomed in the best way and they immediately made me feel at home. An experience that I would absolutely do again. This year, for now, I am only enrolled in the French championship. They have already postponed a couple of races and I will have to wait until mid-June for the official start ”.

You know we will have the third  round in Varano, the last weekend of June … “I’m seriously thinking about it ( he laughs). Once again you are still racing there in Italy and safely. And very few national championships host twin-cylinder grids alone. Then, to tell the truth, I am very instinctive. I could really sign up as a wild card and join you in Varano ”.

And we are waiting for you with open arms, Gregory.

The race in Varano will be the third round of the Motoestate Trophy. The championship includes several cups and trophies such as the BDB, for twin stroke motorbike only, the CRV and the RBF Cup, the cup that facilitates the transition from free practice sessions to the racing world. The round will officially begin on June 26, and it will preceded by a day of free practice on Saturday 12. Indeed, the MES rounds always follow a two-day race program on Saturday and Sunday. This track day will be open to amateurs and riders  and can be easily booked on proveliberemoto.it