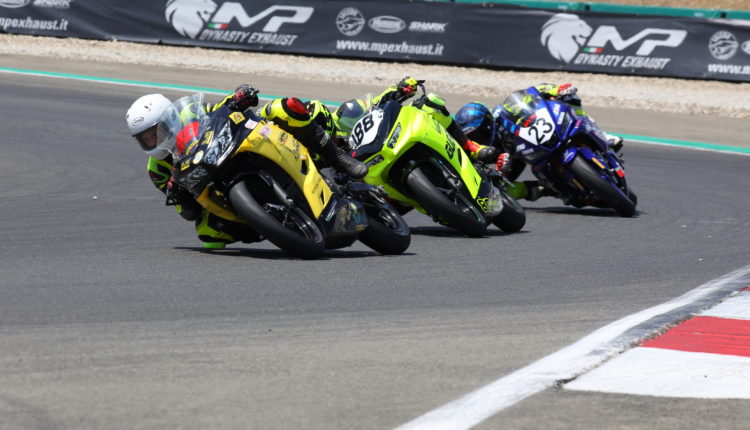 The MP Motoestate Trophies are ready  for the fourth round of the season at the Cervesina (Pavia) circuit on 17 and 18 July. At the Tazio Nuvolari the longest running event in Italy has been running since 2015, always in this period. In Lombardy it will be the turn of the 600 and 1000 classes to run the double round of the season, thus closing the cycle of double races started in Varano with the 125, Moto4, Supermono and 300 cc.

Up to now the Motoestate has proved to be spectacular and full of technical content. By now it is customary to have wild cards of national and international level and several foreigners, which thus legitimize the Motoestate as a championship of great interest.

The 300 is undoubtedly the class of the moment. Many riders on the grid, an average of 33, including the many entered in the series and level wild cards. The Motoestate was thus confronted with Stages, Carrion, in Varano, while in Cremona it was Gennai who won and commanded the wild card platoon. In addition to their regular presence Bradley Smith and Claudio Corti who with their project 109 continue and dispense advice and are a permanent presence on the track, to the delight of the young rivals who can compete with experienced riders and therefore improve the level. In fact, the category has had a blast in terms of affordability. Davide Conte is in charge, who also runs the CIV, but there is no shortage of young riders such as Niccolò Lisci, Giacomo Zannoni, Davide Bollani, just to name a few.

Among the many riders at the start, there are also names known worldwide and others nationally. Mattia Ballerini, in Moto4, is the son of Andrea, a 90s SP rider and protagonist of the world GP, currently working as a technician. Mattia is strong in the first year of high wheels and rides with the bike of Lorenzo Gabbiani’s team, whose father was Andrea’s first mechanic. A story therefore that repeats itself. Another name that has not gone unnoticed is that of Matteo De Stefanis, who made his debut in Varano in the third round, and is the son of Valerio, protagonist of the 750 SP and then of the SBK and Supersport world championship. The sons of Paolo Cristini and Ivano Magnano, leading figures of the 1000 Motoestate respectively, Matteo and Lorenzo are today protagonists of the Kawasaki 400 challenge and are showing good things. So they too took to the track, after having seen their parents in action for years.

From all over Italy and abroad

Reputed to be a tournament in the north, it actually takes place on the tracks of northern Italy, but the MES gathers drivers from all over Italy, including the islands, and from abroad. Said of the wild cards, however, there are many permanent ones that make kilometers to reach the competition venues. Valentino Marchello, in the company of his father comes from Puglia. He arrived at Motoestate thanks to his friend Ricchiuti who has competed in races in the past and the first this year. Valentino races in the 125 SP with the Aprilia and every time he arrives perfectly on time, as does Niccolò Lisci who from Sardinia reaches the continent with his father and mother. Each time, therefore, a journey to make the dream of running come true. They are joined by But Artem, a Ukrainian rider on the Kawasaki 400 of Revlab Motorsport, Marian Krstev in the 125 and Alex Murley, a British rider who races with Claudio Corti and Bradley Smith. Alex, with experience in the BSB and in the SS world championship, is back in the saddle after more than a year and now the title of the 600 Stock is being played, against Osler, leader of the standings.

Dunlop on the rise

The Anglo-Japanese brand frightens its competitors. Dunlop’s latest products are proving effective in all categories. Davide Conte championship leader in the 300 is a reference rider both in the Motoestate and in the CIV and is demonstrating the qualities of the rubber for the small displacement. Dunlop, so after the excessive power in the Moto3, Supermono, Pre Moto3 classes, where it has no rivals, is also making its way into the current class. In 600 Dunlop’s work can be seen thanks to the excellent performances of Saltarelli, winner in Cremona and Varano and then in the National at Imola. Simone from the Greenspeed team is demonstrating the value of the tires, which now fear nothing against the competition. In addition, what is written is legitimized by the huge performances of Pozzo, great protagonist of the Stock and also of the absolute, and of Murley and Osler from Trentino, category leader. Massimo Boccelli, on the other hand, in 1000, after the last round in Varano proved to have got back on top after a difficult start. Double rounds in Cervesina for 600 and 1000. 50 points up for grabs for the major categories and therefore very open games. In 600 he leads Bianucci with 5 points of margin over Saltarelli and 16 over Ferrari, third at the moment. More detached Gioia and Fortunati, but with three races still to be played, everything is possible. Especially in a hard-fought category like the 600.

The news of the 1000 is the absence of Bartolini, who as leader will find himself chasing. The GPM driver has 4 points ahead of Brugnone, 13 over Mozzachiodi. Palladino, Cristini, Boccelli and Maestri, winner in Varano, are all fighting and at the end of Cervesina there will certainly be jolts to the standings. In the 300 Conte leads with a good margin over Lisci and Zannoni, revelations of this championship, but in the most numerous category the twists are never lacking. And even in this case everything is very open. Same goes for the Supermono with Scagnetti and Morri divided by only 6 points. More detached Ameli and Raimondi, unlucky in the Varano round. Among the 125 Balboni leads in the SP, ahead of Manganelli, very consistent in the last round and winner of both races. The others are more detached, headed by Agnorelli. In the Open leads Specolizzi in front of Albani. In Moto4 Vitali leads with 75 points, followed by Ballerini stopped at 45 due to the absence in Varano. In the Race Attack, a category that runs on Sunday and approaches free practice as a format, in the 600 Liberini has a good margin over Coletto and Como. In 1000, on the other hand, Valsecchi leads with 5.5 points over the excellent Jari Remoto who in turn precedes Torchio, 20 points behind the top, despite two zeros. So very open championships and open registrations for the land round of the principality of Nivola for two days of speed and fun. We will start on Saturday morning, July 17, for the optional free practice and then from 2 pm the start of the official tests. While Sunday morning the last tests and then the races.

For info and enrollment