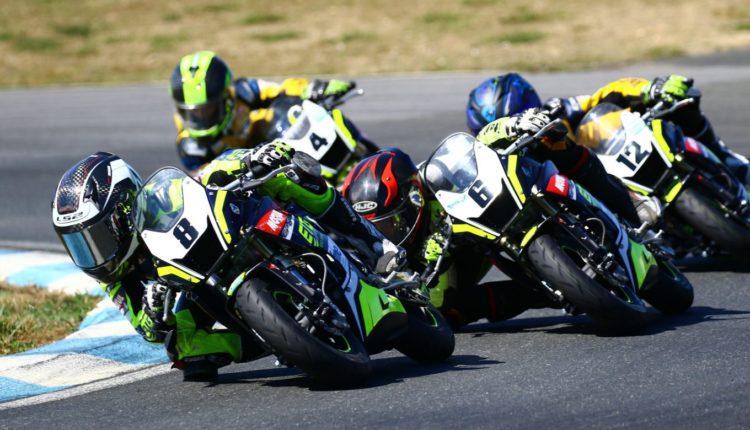 The fourth and final event of the Spanish Minvelocity Cup took place this weekend. As is customary throughout the season, a good number of subscribers gathered at the A Madalena Circuit. It was the last chance for the young drivers to prove their quality once again and so exciting heats came out.

All categories were very open before the last round and the premises could only be encouraging. And they weren’t disappointed.

lvaro Chichurri takes gold in MiniMoto
After some hard-fought timed practice sessions with the drivers divided into two groups, the official heats took place. In Group A, Manuel Esteban, Nicolás Jiménez and Álvaro Chichurri crossed the line before anyone else. In the second, Albert Lyon Muñoz won, followed by José Reyes. Chichurri closed the top three again.

With these results Muñoz climbed to the first step of the podium, Chichurri to the second and Jiménez to the third. Álvaro Chichurri is the new champion of the Minimoto category.

David Demans wins in MiniGP 110
In the first heat David Demans won, Eduardo Manuel Torres finished second and Sánchez third. In the second, something similar happened but with the victory of Mateo Marulanda. Sánchez second and Torres third.

With David Demans as the winner of the Ohvale, Marulanda, Sánchez and Torres were the protagonists of the final podium. Demans is this year’s champion.

Alberto Enríquez, first champion of the FIM MiniGP Spain Series
Izan Rodríguez, Alberto Enríquez and Pablo Olivares became the protagonists of the FIM MiniGP Spain Series. The three started from the front row and dominated both sets. In the first, Rodríguez saw the checkered flag in first position, leaving behind Enriquez and Olivares. In the second win for Izan, Pablo finished second and Alberto third.

Luis Miguel López, the best in Moto5
With Joel Pons starting from pole, Moto5 was another category that gave a spectacle. Aymon Bocanegra and Luis Miguel López finished second and third respectively in the time trial standings. In the first round, López won by crossing the line by a small margin over Jacobo Hinojosa, who finished second. Olivar Cantos finished third. In the second, Pons was the winner, leaving behind Bocanegra and Cantos respectively arriving in order.

After a spectacular year for the Spanish Mini Speed ​​Cup, in 2022 the discipline will return with renewed enthusiasm and new illusions. We really can’t wait.

IRRC: HERE THE WINNERS OF THE THIRD ROUND