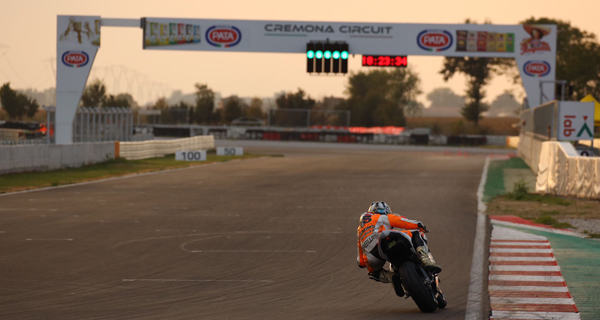 The 2021 season of the MP Dynasty Exhaust Trophies ended on saturday on the Cremona Circuit. The expectations of the riders were high as the games for the awarding of the titles remained open. It was therefore a weekend of fire, characterized by tussle, overtaking and twists, even the much feared rain dodged the Circuit, so as not to ruin the MES party.

Off to the disputes 11.30, as scheduled. In 125 / Moto4 the fight for the title was still a matter to be resolved between Gabriele Balboni and Emanuele Magnanelli, with the latter leading in the general classification by only seven points. A contest that rewarded Magnanelli, who ran with the lead in the general classification, controlling his opponent and finishing at the finish in third place overall, a position that earned him the 2021 crown. whose success guaranteed the title of the moto4. Second Square for William Pisano.

In the Supermono, an exhibition dedicated to single-cylinder bikes, the two-way fight between Daniele Scagnetti and Matteo Morri looked fiery. A single point separated the two in the general classification. After a hard-fought competition with a knife between his teeth, it was Morri who, thanks to his success, became champion. The place of honor went to the ever domo Scagnetti, with Alessio Guarnieri completing the podium. To underline the international character of the category, in which the transalpine Gregory Penna has decided to return to visit the friends of the MES. The French rider met MotoEstate in the last round of last year: a pleasant surprise to meet him again. A presence that is added to that of the Austrian Frey who attended the first rounds of the season, interrupted prematurely due to an injury.

The 300 Classe Viva was the only category with the title already assigned. Although Dunlop standard bearer Davide Conte was at the start with the virtual number 1 on the hull, the young drivers of the 300 did not spare themselves, giving life to a race full of battles and twists. During the first laps, the riders’ train broke into two groups: the former MotoGP rider Bradley Smith, Davide Conte, Mattia Vignati and Davide Bollani fought for the podium, giving rise to no holds barred battles. Behind the treads, another group of 10 riders commanded by Fabio Lorenzini and Giacomo Zannoni, was competing for fifth place. In the head then everything happened. Conte tried to honor the title with a win, but slipped in an attempt to overtake Smith in the last corner of the fifth lap. Bollani and Smith remained contending for the success with the young Vignati who gradually lost contact. The two continued, giving life to a tussle that will remain forever in the mind of the fifteen-year-old from Milan. The winner was Smith’s experience, who slipped Bollani into the last pass. Vignati finished third.

In the queen classes, the 600 and 1000 the situation was diametrically opposite. In the open 600 Simone Saltarelli was champion even before the start, thanks to the forfeit of his first pursuer Niccolò Bianucci. However, the Dunlop bishop did not just manage the race, but imposed a pace that was impossible for his opponents to keep up with. Behind him was a brawl between Giacomo Gioia and the English Alex Murley, first in the Stock, who ended in order.

In the 1000 open there was the fight for the title and the ending was a surprise with three riders fighting for the title: Andrea Maestri, Cristian Brugnone and Massimiliano Palladino. The three especially took care to control themselves, giving sight to a waiting race, thus leaving room for the wild cards Ivan Goi, Fabio Starnone and Davide Eccheli, who finished the absolute in the order.

Outsider of the day was therefore Gabriele Perri, who finished first among the members of the championship, thus making up for a season not up to par with his talent. Behind him, the ever domo Valter Bartolini and Massimo Palladino. Maestri seemed the most in shape of the three and finished in front of his direct opponents, but after suffering a penalty of twenty seconds for early departure he was out of the game. The drama at the Circuit continued. Palladino finished first among the title contenders, in seventh position, with Brugnone ninth on the last lap by Bocelli. This would have resulted in the Tecnica Moto rider (Palladino) wearing the laurel wreath. The race direction, however, immediately blocked everything: Bocelli’s overtaking took place with yellow flags unfurled. Brugnone regained eighth position and could thus celebrate the 2021 title.

Race Attack closed the day, a promotional trophy that runs only on Sundays and facilitates the transition from free practice to the world of racing. In 600, only a few points were needed for Andrea Liberini to be crowned champion. Andrea did not feel the emotion and put in an impressive double. In race one followed Paolo Cavallaro (first of the Rookies) and Luca Coletto, who exchanged positions in race two. The 1000 was instead all a matter between Yari Remoto and Lazzaro Valsecchi, enemies on the track and great friends in the paddock. Both heats saw them protagonists together with Niccolò Pellegrinelli, a driver in strong growth. The three closed the two races in the same order: Valsecchi, Remoto and Pellegrinelli. Thanks to the difference in points in the standings and the management skills demonstrated, Remote became the 2021 champion.

This concludes an exciting season. A year characterized by participatory starting grids, with many talented drivers. Young promises and veterans who have given new luster to a championship that can’t wait to project itself to 2022. See you next year

IRRC: IT ALL ENDED IN FROHBURG