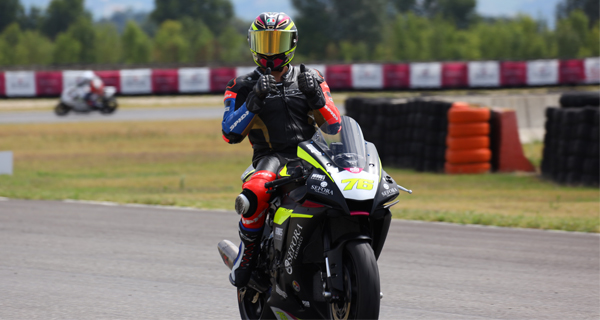 MotoEstate interviewed Claudio de Stefano, aka “The Italian Black Rider”: the Race Attack 1000 rider and Content Creator with a particular story to tell.

“The passion for motorcycles and the desire to tell my story are without a doubt my passions and what identifies me. I started my motorcycle adventure when I was very young. I immediately reached important milestones in the Italian Speed ​​Championship (CIV) in the 125 and 300 classes, managing to end up on the podium despite not running with professional teams. Then doing some tests to pass into the Supersport 600 category I had a bad injury. I slipped and two bikes landed on me. It was a tremendous impact in which only very few bones managed not to break. It goes without saying that for several years I have been away from the track. ”

The passion for motorcycle however, never went away “No, absolutely. After I recovered physically, I started riding a motorcycle on the road again. Then in 2019, after a long reflection, I decided to get back into the game. At that time the idea of ​​trying to tell my story was also born. I wanted to try to be a positive example by telling a path of rebirth. I started at the beginning by publishing the classic posts on Instagram. Then I experimented with videos on YouTube. The first ones were very amateur, but immediately the people liked them. After the first year, my YouTube channel had experienced the fastest growth in the history of YouTube Italia Motori. And from that moment on I decided to devote myself to the creation of contents with more and more professionalism and constancy “.

Over the last few years, the world of motorbikes has seen the birth of several riders- influencers “Yes, influencers are everywhere. I have not received a particular influence from anyone. I simply want to tell my story: the path of rebirth of a motorcyclist who, after a serious injury, decided to get back in the game and start from scratch “.

The MotoEstate for “The Black Rider” (the name by which Stefano is known on the web) was what allowed the return to an official championship: the real restart began in Varano last April “Yes – Claudio confirms – I chose to restart from the MES essentially for the competitive level. Above all in the Race Attack 1000 the riders are very fast. Already from the first tests we were able to set times very similar to those who raced in higher categories”.

The debut season in the MES Trophies ended in Cremona with a fifth place in the general classification and the silver medal in the Challenge sub-classification “During this year the growth has been continuous. After a complicated start, me and the my team found the right place fairly quickly and we put in a series of excellent results, such as the podiums in Cremona during the second round and in Cervesina, in the fourth. Me and the guys from Tecnica Moto gave one hundred percent “.

Speaking of Tecnica Moto Racing Team, this year Stefano has collaborated with a great ex rider and now Team Manager like Andrea Zappa “For me it was a pleasure and an honor. I could learn tricks that can only be learned with experience “.

Experience that next year will bring The Italian Black Rider to race for … “I still can’t anticipate anything – concludes Claudio laughing – what I would certainly like to do is to breathe the air of the MES Trophies again: the place where I returned to dream”.