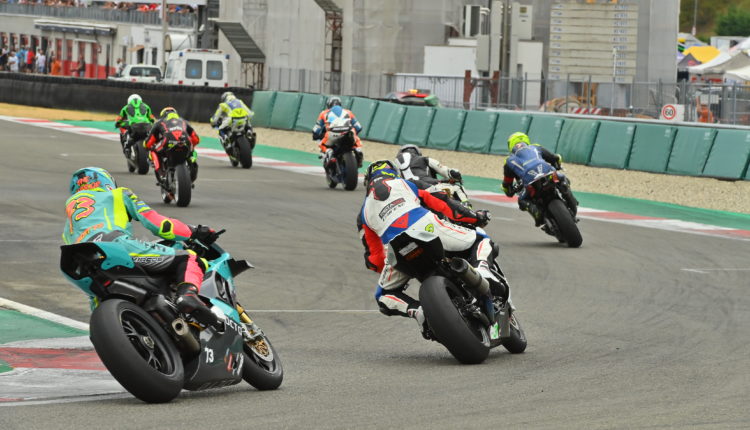 It was a hot fourth round for the MP Exhaust MotoEstate Trophies in Varano. On the banks of the Ceno, participatory grids and fierce riders provided spectators a show they will never forget.

After a morning characterized by rain and bad weather, with the start of the races the sun returns to the Parma track. The protagonists of the first battle of the afternoon were the riders of the most talked about category of this weekend: the 125 and Moto4. Emanuele Magnanelli, Federico Trubia and Daniele Galloni confirm themselves as the fastest also in the race, after having monopolized qualifying. The trio sprints well at the start and gives the spectators three laps of absolute brawl seasoned with overtaking and counter-overtaking. On the third step, however, the young Trubia falls and leaves the scene. Magnanelli takes advantage of this and is good at lengthening just enough to detach Galloni, who ends up in second place in the overall standings and first in the Moto4 standings. Third step of the podium instead for Alessandro Del Bianco who together with the other “Big” on the RF300 Corsa Moto4 gives a show. Behind him conclude, Simone Saltarelli, Luca Vitali and Nicolò Carpina, second in the 125SP. The category podium for the 125 SP was closed by Phaedra Teffo.

Then the Supermono class riders take to the track, on the grid with the BDB twin cylinders, a trophy promoted by MC Saponettari. Valter Bartolini reconfirms himself uncontainable on the Varano track and wins his fourth victory of the season. Among the single cylinders, Vittorio Ameli stands out, concluding in third place in the overall and first among the Supermono. The category podium is closed by Giulio Basili and Thomas Brianti, at the start on a Moto P.

In the middle class the protagonist of the day is Michele Filippi, author of a great comeback. The Brescia rider struggled at the start and found himself in fifth position. The authors of a great start are Giacomo Gioia and Giacomo Mora, who conquer the lead after the first laps. Filippi, however, is not discouraged and with the passing of the laps he finds his rhythm. On the third lap he manages to get the better of his teammate Michael Ferrari, on his return in 2022, and then of Giacomo Caffagni. Philippi thus sets out in pursuit of Joy, catches up with him and overtakes him. Two passes from the end, Gioia falls in an attempt to keep up with the rider of Team Bikers da Cordoli who thus wins the first victory of the season. Silver medal for Giacomo Caffagni, good at putting Mora on a few back from the end.

The 300 Classe Viva is beautiful and participatory as always. Thirty-one young people at the start who as usual have given birth to battles with no holds barred. Fabio Lorenzini and Alfonso Coppola took off well to conquer the top positions after a few laps. Giacomo Zannoni is stationed immediately behind. The Dunlop rider is fast and aggressive and puts pressure on the leading duo during the first part of the race. Christian Stringhetti is also able to recover after a less than optimal start from the first box. The pole-man thus begins a spectacular comeback that leads him to conquer the second position and to attack the leader of the day Coppola. The latter, however, does not fit in and successfully defends himself from frequent attacks by the opponent and takes the top step of the podium as his own. Third place that finally goes to Fabio Lorenzini, who is also able to withstand the attempts of overtaking by a never defeated Giacomo Zannoni who collects important points in terms of the championship.

First verdict of the season for the MES 2022 Trophies. The 1000 Open has a new champion: Valter Bartolini. The standard bearer of the GPM team this year was indomitable and on the Varano track he won his fourth victory of the season which earned him the laurel wreath. The # 71 sprints well from pole position and sets a pace that is impossible for his opponents to maintain. Instead, the fight for the podium is beautiful and hard-fought. Gabriele Perri is the author of an excellent start and from seventh he completes the first passage to second place. Immediately behind, Paolo Cristini and Massimo Boccelli do not give up and after a first phase of study they are in pursuit. The two are determined to make this trip to the Moto-Valley memorable and thus begin a good comeback that leads them to overtake Gabriele Perri and take second and third place. A few steps from the end, however, Cristini incredibly loses pace and is overtaken by the ever-green Boccelli and Gabriele Perri, who conclude in order.

Race Attack 600 and 1000, a preparatory category designed to be the link between the world of free practice and that of racing, close the day. In 600 both heats are hard-fought and spectacular. In race 1 Matteo Cristini starts well from the first box, but is immediately followed by the duo Luca Coletto and Marco Como. One lap from the end, Coletto attacks and manages to get the better of Cristini. Como also tries, but this time Cristini is not there and defends the second position with his teeth. Como closes third. In the second heat of the day the protagonists are always the same: Cristini, Alberto Bettella (unlucky in race 1 for a long time that excludes him from the fight for the victory), Como and Coletto. On the second pass, however, Cristini falls and thus leaves the game. Como and Bettella take advantage of it and gain the lead of the race. Coletto wants this to be his day at all costs and starts a creepy comeback. First he has the best of Como and then of Bettella and thus conquers the highest step of the podium. In second place closes Como, while in third Edoardo Boccellari, who takes advantage of the disqualification inflicted on Bettella. Thanks to the sum of the results of the two races, the podium of the day is made up of Coletto, Como and Boccellari, first in the challenge sub-classification.

The Race Attack 1000 opens immediately with a twist: Lazzaro Valsecchi, who started from the second box, falls at the end of the first pass. Lorenzo Voch thus makes the lead of the race his own, chased by Nicola Ruggero and Mattia Gollini. The two follow him and overtake him and become protagonists in their turn in an exciting battle. A few laps from the end, Gollini manages to get the better of him, able to overtake his opponent in the final and more technical part of the circuit. Closes in third place in the absolute Voch, first among the members of the Race Attack category. The podium of the Naked, which today ran a double race, reads: Gollini, Ruggero and Gelsomino Papa. In race 2, Lorenzo Voch starts strong and immediately gets behind Ruggero, Gollini and Valsecchi. The three try to chase him, but the rider of the Bikers da Cordoli team is determined to make the whole stake his own. At the height of the fifth passage, however, Voch suddenly drops, facilitating the recovery of the pursuers. The red flag displayed for Andrea Crifò’s fall, however, allows Voch to win. Gollini, first of the Naked and Valsecchi complete the podium. At the end of the two heats of the day, the podium of the Race Attack 1000 is made up of Voch, Pellgrinelli and Proietto.

After the summer break, the circus of the MES Trophies will stop in Cremona at the end of September, for the last and decisive round of the season.