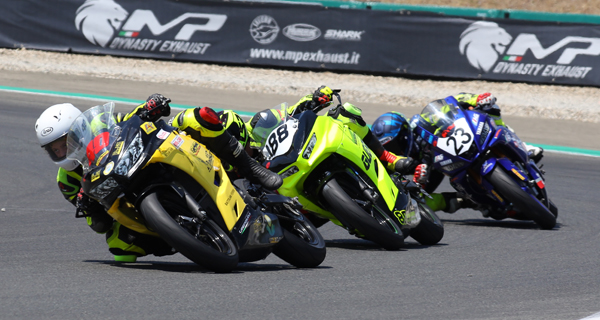 The 2022 season of the MES Trophies will not undergo substantial changes. The news mainly concern the widening of the number of motorcycles at the start, while the race weekends will follow the same race program: Free practice on Sunday morning, while in the afternoon there will be the first qualifying sessions. On Sunday morning last qualifying and in the afternoon, the races.

As anticipated, the Naked bikes will return to tread the tracks of the longest-running championship in Italy, which will have distinct awards based on the power of the bikes. The MES has chosen this formula to facilitate the participation of all naked motorcycle. The Manufacturer have indeed indulged themselves with displacements and horses. As a consequence, there will be awarded for: Super-little: up to 110 horsepower, Super-medium up to 165 HP, Super-big over 165.

Always with a watchful eye on the evolution of the motorcycle market and other nascent championships, the MotoEstate for 2022 will stage the Big Supersport and the Junior Supersport. The Big will race within the 600 Open, with a separate classification and will see Ducati, Triumph and MV at the start, which seems to be the future of the category. On very technical circuits such as those of the Motoestate the traditional 600 will be able to do the big voice. It will certainly be another year of passion. While in statistical terms, as already mentioned, the rankings will be divided. Also confirmed the 600 Stock for motorcycles with engines and electronics of series derivation. The stock will run as usual under Dunlop mono-rubber. Drivers will be able to choose between grooved tires, D213 or the KR slicks.

It is a bit like the novelty of the market. After the Aprilia 660, the Yamaha R7 and Honda CBR 650 will now also arrive. All bikes that can act as an intermediate step between the 300 SS and the 600SS. They are all new, low-cost vehicles and the Open regulation will facilitate the participation of all motorcycles, without particular outlays. An excellent category for those who want to take their first steps on multi-split and for pilots who want to train and combine the MES with the single-make.

Regulatory changes in the Moto4

Moto4 will no longer be single-engine, but it will also be possible to race with Aprilia 250s and prototypes with Yamaha WR engines. In this regard, the motorcycle event in existence since 1986 has allowed the Zogshen engines that have raced in recent years to be developed according to very specific rules, thanks to the help of renowned technicians, to be competitive against other engines. The category is undoubtedly ideal for young people who want to approach prototype motorcycles, at a low cost. We will race in Dunlop mono-rubber, with preforming tires as demonstrated in recent seasons.

In the other categories there will be no substantial changes. The regulations of the 125 Sp and 125 Open, 250, 300 Supersport, Supermono, 1000 Open and Stock, Race Attack categories remain unchanged. For the latter, the entry criterion in the Challenge ranking changes.

Like last year, there will be no discards and the points will go only to the members of the championship. However, the scores change and become the same as those of Motocross. The winner will be awarded 25 points, while the second 22 and the third 20. Then 18, 16 and so on until the twentieth classified who will earn 1 point. There will also be additional points: 2 for the pole-man and another 2 for those who set the fastest lap in the race. If the pole and / or fastest lap are won by a wild card, they will not be awarded.

MOTOESTATE 2022: HERE THE WORDS OF THE ORGANISER BRUNO SANDRINI