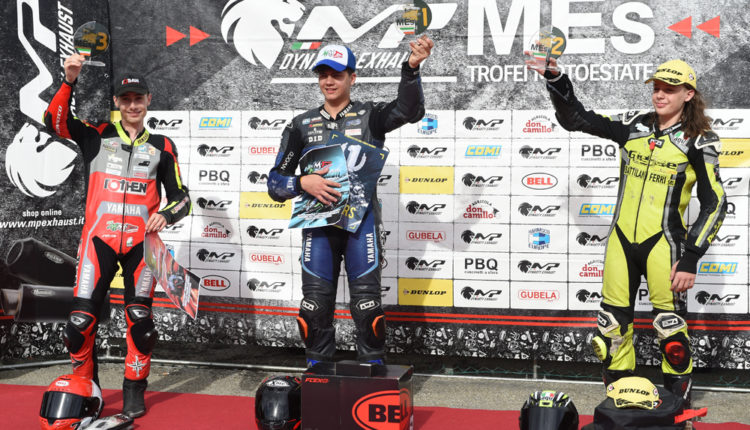 Also in this 2022, the MotoEstate Trophies closed their sporting season on the Cremona track at the end of September. During the fifth and final round, the champions in all categories were declared, which as always are many. In the 125, divided between SP and Open in which the legendary 2 Strokes compete, Emanuele Magnanelli, Marjan Krstev and Mattia Muttoni were the best in the SP classification, while in the Open, the top three were Nicola Rosati, Simone Cambioni and Mauro Bardelli. Moto4 instead went to Federico Trubia, on his MotoP, while in the Supermono, a class dedicated to handcrafted mono-cylinders, the best were Andrea Raimondi, Daniel Bianchi and Vittorio Ameli.

In the 300 Supersport, which this year gave exciting battles, Mattia Sorrenti, Giacomo Zannoni and Davide Bollani created a breathtaking season and deservedly conquered the first three steps of the podium. The 600 was also beautiful and hard-fought this year: in the Open Giacomo Gioia, Mattia Balella and Giacomo Caffagni won them gold, silver and bronze medals. In the Stock, on the other hand, the best were Andrea Tomio, Matteo Osler and Girardi Niccolò.

In the premier class, the 1000 Open Superbike, Valter Bartolini regained the laurel crown, after the success of 2020. Immediately behind, Emanuele Lo Bartolo and Massimo Boccelli from Brescia. In the Stock, first place for Andrea Tomio and second place for Francesco Bernoni.

We conclude with the Race Attack 600 and 1000, two categories designed to be the trait-d’union between the world of free practice and that of racing. In the 600, Marco Como, Luca Coletto and Alberto Bettella confirmed themselves as the fastest at the end of an exciting year. In the RTK 1000, the top three were Lorenzo Voch, Niccolò Pellegrinelli and Lazzaro Valsecchi. In the Race Attack world, the champions of the Challenge and Rookies sub-rankings were also awarded.

Last, but not least, the Naked, dedicated to semi-faired. The best was Nicola Ruggiero, followed by Gelsomino Papa and Mattia Gollini.

The MES Trophies set an appointment for next year, for a new exciting season.