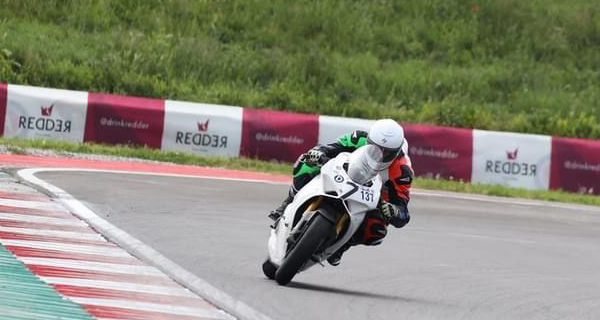 Second episode of the interview series  promoted by the MotoEstate Trophies. The protagonist is again a champion of the “Rookies” category, this time for the Race Attack 1000: Niccolò Pellegrinelli.

At his first participation in a track competition, this year Niccolò stood out for his consistency and results, embellished by the third place won in Cremona during the fifth round of the season. The passion for motor sport, however, was born much earlier: “Yes, exactly. I’m 30 and this was my very first season in an official league. The love for two wheels, however, blossomed many years ago: I don’t know exactly where and when, I just know that it’s something overwhelming: it stuns you and it’s really impossible to get out of it “.

From the passion for motorcycles to the choice to start in a championship like the MES: a journey long thirty years: “the beginnings on the track were more than anything else a necessity – explains Niccolò – I was without the driving license and in love with the high-speed feelings, the only way  was therefore the track. During the very early days I remember that I was very slow. Getting used to a super sports bike isn’t easy, especially if you’re one of my size. But then I saw that I was improving lap after lap and I had no intention of stopping ”.

Dedication and consistency are qualities necessary to stand out in many sports, including racing. However, it was his ambition that convinced Niccolò to sign up for the MotoEstate. “In every sports, including the gym, another great passion of mine, work is what makes the difference. Ambition then pushes you to try to improve yourself more and more and it is only by facing the best riders that you succeed. Hence the decision to enroll in the MotoEstate in the Race Attack 1000: a perfect category to start racing in an economical and competitive category“.

An extremely positive rookie season: sixth in the overall ranking and first in among the rookies: “the podium was something realy magical. During this first year the emotions I lived are impossibile to describe. The first grid in Varano de ‘Melegari oduring the first round of the season in particular: it is in that moment that I realized that it is when the lights switch off that you really feel alive. Another great satisfaction was seeing the final flag for the first time. Finishing a race knowing that you have given your hundred percent is something truly unique “.

Set aside this rookie season, the 2022 edition will see the # 7 back on the grid in the Race Attack 1000: “Absolutely. the goal is always to have fun trying to win as many races as possible and why not, even the category. As for the future, I sail on sight, without too much hassle. Only one thing is certain: I will be racing as long as I have fun ”.

Niccolò’s is story of love and passion towards motorsport . Emotions that all of us lovers of two wheels have in common. We will see Niccolò’s progress next season.

FSBK: THE 2022 PROVISIONAL CALENDAR IS OUT ONLINE