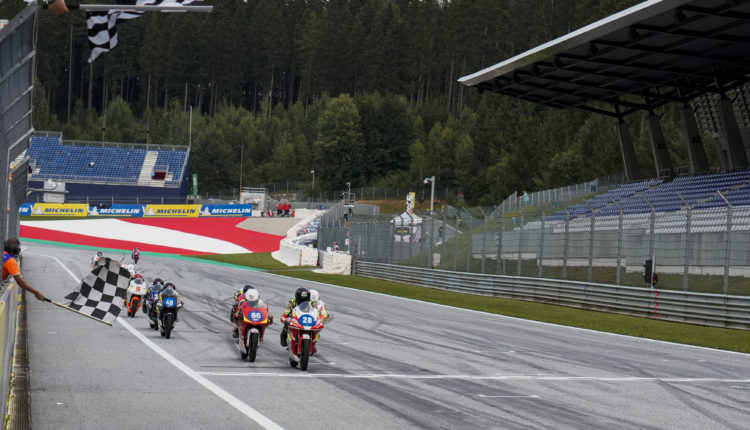 The Hungarian impresses for a maiden win, with Kocourek taking second and Moor on the podium once more

Take two at the Red Bull Ring saw the Northern Talent Cup deliver another Spielberg masterpiece, with Kevin Farkas (Agria Racing Team) taking to the top step on Sunday after another impressive race at the front. The Hungarian fought off polesitter Jonas Kocourek (JRT Brno Circuit) and Race 1 winner Rossi Moor (FAIRIUM Next Generation Riders Team) to take his debut victory, getting his elbows out to come out on top by half a tenth.

Kocourek once again got away well from pole position, but once again it was a big group fight from the off – with even more riders in the mix on Sunday. At times though it did seem like a replay from Race 1, with Farkas and Moor going toe-to-toe at the head of the race, the numbers 92 and 28 switching positions in the battle for the lead.

Points leader Jakub Gurecky (JRT Brno Circuit) also made a good start on Sunday and was up in the fight a little earlier than in Race 1, with Lenoxx Phommara (Phommara Team) initially the missing presence from Saturday. The Swiss rookie bombed down through the order to much nearer the back of the freight train, and it was a tough start for Lorenz Luciano (Junior Black Knights Team) too as he struggled to get in the same postcode as the podium fight.

It was a battle for the ages but Farkas and Moor were both constants at the front, and there were some standout moves – and moments – from the likes of Leo Rammerstorfer as the Austrian Junior Cup rider made his mark. By the latter laps the likes of Phommara and Luciano were back in the mix though, both making up some serious ground – but drama then struck for the Belgian rider. After making it from P16 to second at one point, Luciano then overcooked it and headed into the gravel – staying upright but rejoining in P16 once more, out of the points and with almost no time left to find some redemption.

Up ahead there was less drama, and heading onto the final lap it was the familiar number 28 in the lead. Turn 3 would, however and of course, cause a shuffle though. Moor was the man on the move and the number 92 threw it up the inside and made it stick, with Kocourek taking over in second too. But Farkas got good drive and down into Turn 4, he struck back to take the lead once more.

The hammer going down at the front for the number 28 meant there was less final corner shuffling on Sunday and Farkas headed in first and out first, keeping tucked in for the drag to the line and staying ahead to take a hard-fought first NTC win. Kocourek kept it clean to take second and get back on the podium after a more difficult Race 1, with Rossi Moor retaining some good momentum with another podium.

It was close just behind but Gurecky did another solid job to take fourth, again off the podium but extending his lead as Luciano failed to score. Phommara’s fight back got him good rewards in fifth too. Loris Veneman (Kahuna Security Racing) took P6 and another good finish from his impressive front row start, and Rammerstorfer made an impression with seventh on Sunday, the top AJC runner.

And so the curtain comes down on Round 5 for the NTC, and now it’s time to head back north to the TT Circuit Assen for the penultimate race weekend of the season. It’s now a whopping 53-point advantage for Gurecky at the top of the standings, so can Luciano and Moor hit back in the Netherlands? They arrive as the race winners in Round 4 at the same venue! Tune in for more next weekend as we race back-to-back in the NTC.