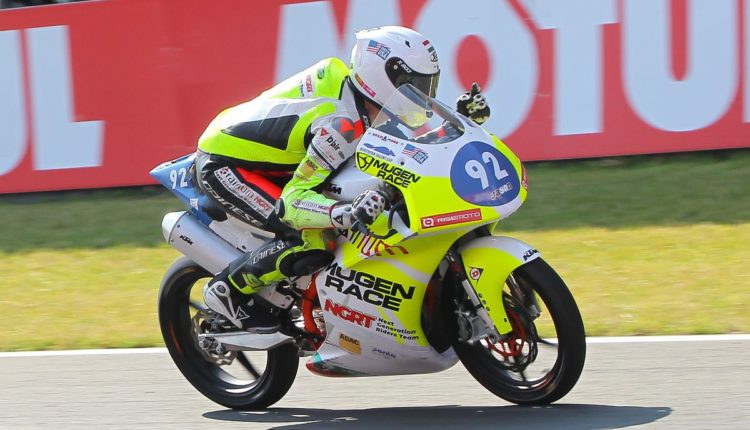 The Hungarian gets back on top as Kitzbichler takes a first podium in second and Gurecky slices through once again.

Rossi Moor (FAIRIUM Next Generation Riders Team) smashed it out the park at the TT Circuit Assen in Race 2, the Hungarian putting the pedal to the metal early to bolt away from a huge group battle for second. That was won at the line by Niklas Kitzbichler (Racing-Team-Kitzbichler) as the Austrian finally took that first podium, with points leader Jakub Gurecky (JRT Brno Circuit) once again pulling off an impressive recovery ride to third, from 20th on the grid.

With sunny skies overhead and some redemption to find, Moor wasted no time hitting the front and getting the hammer down. Initially Jacopo Hosciuc (Hos Racing Team) tagged onto the back of him but then early drama hit for the Romanian as he suffered a technical issue. For a while thereafter, Moor’s gap to the pack hovered at a couple of seconds, but as the battle raged behind the number 92 slowly disappeared into the distance. Keeping it clean, tidy and quick throughout, he crossed the line with over seven seconds in hand to make quite a statement on Sunday.

Chopping and changing, it was anyone’s race but this time as the final chicane dawned for the final time, Kitzbichler had put himself in the perfect position. The Austrian was almost neck and neck with Gurecky on the final push to the flag and a photo finish it was, split by just 0.009 as Kitzbichler put his Race 1 bad luck to bed to just pip the points leader. Gurecky still took another podium to keep his 100% podium record in tact in 2021 though, and once again from P20 on the grid.

Loris Veneman was forced to settle for fourth and just missed out on the podium once again, but the Dutchman managed to fight off Race 1 podium finisher Zuda as the number 23 had another impressive race but couldn’t quite get back on the box. Luciano was next up, losing out in the shuffle and forced to settle for a few fewer points than he likely wanted given Gurecky was on the podium.

Varga took a step to dice it out at the front on Sunday and takes home seventh, ahead of Kocourek and Farkas. Phommara fought in the group but then got a Long Lap for shortcutting through the green, the Swiss rookie taking it on the last lap and therefore forced to settle for tenth.

Boessenkool crashed out, and there was final chicane drama for Beekmans as he tagged Zuda and then Valentino Herrlich (Busch und Wagner Racing Team). Beekmans and Herrlich both went down, but riders ok.

That’s it from another classic battle at Assen. The Cathedral always delivers and it certainly did for the NTC, who now head into the summer break before returning to race alongside MotoGP™ – joined by the Austrian Junior Cup – at the Styrian GP in August.