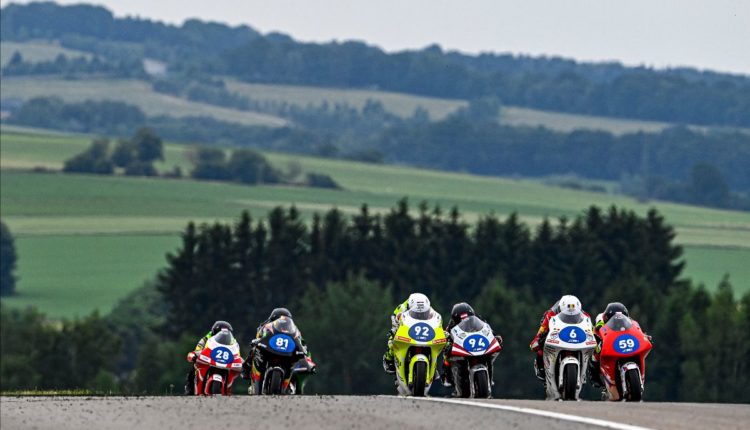 We have a new first time winner! After some incredible pace in preseason prefaced a rollercoaster first two rounds for Rossi Moor (FAIRIUM Next Generation Riders Team), the Hungarian took his first podium in Race 1 of Round 3… and on Sunday he went one better. The rookie duelled it out against Jakub Gurecky (JRT Brno Circuit) on the final lap, making a move stick at the final corner to become the first to defeat the Czech rider in the last five races. Gurecky, nevertheless, increases his points lead as Jacopo Hosciuc (Hos Racing Team) completed the podium.

From the off the stage was set for another similar battle, but on Sunday the podium finishers had a few more names to contend with. Lorenz Luciano (Junior Black Knights Team), Kas Beekmans (Team KNMV), Kevin Farkas (FAIRIUM Next Generation Riders) and Niklas Kitzbichler (Racing-Team-Kitzbichler) were all in the fight at the front, with a small freight train swapping and changing positions around the Sachsenring. With Farkas and Kitzbichler making a big step forward, the points were even more crucial for those near the top of the standings.

This time around, Moor wasn’t content to let Gurecky lead onto the final lap after the Czech rider outfoxed the field on Saturday, and instead the Hungarian blasted round Turn 1 for the final time in the lead. And he hung on until Gurecky hit back down the Waterfall, but Moor would have one final shot – and he took it to perfection. Keeping it pinned down the inside of the final corner, the number 92 crossed the line just half a tenth ahead to take his first ever NTC win.

Gurecky may have lost the victory and the chance at five in a row, but the Czech rider increased his advantage to 42 points at the top of the table, impressing once again and, once again, in the dry. Hosciuc won the squabble for third just ahead of the rest, the Romanian moving forward after a fifth on Saturday and back on the rostrum.

Fourth went to Farkas as he picked his way through to his best result yet after an impressive fight, with Luciano the man to lose out in the latter stages and the standings as he completed the top five. Beekmans took sixth after another impressive and solid performance once again from the consistent Dutchman.

Kitzbichler took seventh place at the flag, which equals his Race 1 result, but the Austrian only lost out on the podium late on after getting much nearer the front – and pulling some choice moves to boot.

Stepan Zuda (Motoracing23 Klub V ACR) charged from 24th to eighth in an impressive display, ultimately ending up in a lonely ride after doing so much work early on but being unable to catch the front group. Jonas Kocourek (JRT Brno Circuit) and Tibor Varga (Forty Racing) once again completed the top ten, also in some clear air each.

That’s a wrap on Round 3 of the NTC, but it’s not long to wait for the next one as the Cup heads to the TT Circuit Assen for Round 4, alongside the MotoGP™ paddock once again.