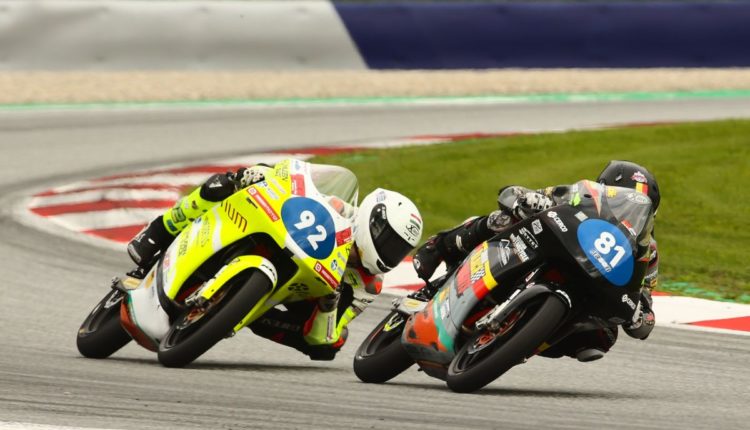 NTC, MOOR VS LUCIANO: SPECTACULAR SPIELBERG DUEL ROUNDS OUT THE SEASON IN STYLE

The fight for second overall went all the way to the wire, with the Hungarian coming out on top on track but a penalty then adding some post-race drama

The 2021 Northern Talent Cup concluded with a spectacular and sunny final chapter in Spielberg. With Rossi Moor (FAIRIUM Next Generation Riders Team) and Lorenz Luciano (Junior Black Knights Team) fighting for second overall in the standings, there was plenty on the line and their duel didn’t disappoint. Pulling away from the pack in the latter stages, the two went toe-to-toe in a fabulous final decider – with Moor just taking it by thousandths. But then there was drama as he got a penalty for his riding after the flag – dropping him to fourth in the race . That means Luciano wins and takes second overall, Kevin Farkas (Agria Racing Team) is second in the race and Jacopo Hosciuc (Hos Racing Team) slots into third to round out the year.

As the lights went out, Moor took the holeshot from pole but 2021 Cup winner Jakub Gurecky (JRT Brno Circuit) made an early move through. Luciano then got back in the mix, with Farkas another name starting to stand out. Still, it was a huge freight train at the front for much of the first half of the race.

By Lap 10, however, simply being at the head of the train had started to turn into a gap for Moor. The number 92 was pushing to break away, but Luciano was on the case. The Belgian tagged onto the back of the Hungarian and went with him, the two carving out some space for a duel to decide the runner up for 2021.

From thereon out, it was war. Clean, aggressive and a real thriller to end the season, the penultimate lap was already a showstopper. Luciano was ahead over the line, Moor attacked at Turn 1, the 81 responded, the 92 found another answer. The last lap started the same, with Luciano ahead, but Moor struck again at Turn 1. But this time the Belgian shoved it up the inside at Turn 3, and after that Moor seemed to hold off.

The Hungarian stayed glued to the back of the Junior Black Knights Team machine ahead, but waited for his moment: Turn 9. Getting it done and able to keep it around the final corner, it came down to the drag to the line and Luciano pulled out to try and slipstream past but the metres ran out. Moor stayed just millimetres ahead to take the final win of the year, or so he thought. But then he was awarded the penalty, seeing the Belgian take the 25 points.

Behind, what had been a few tenths of gap for Farkas became another freight train but he held on to third over the line and second in the end, with Hosciuc close behind as the Romanian got back in the mix after his Long Laps on Saturday. Moor was classified fourth, and Jonas Kocourek (JRT Brno Circuit) took fifth. Loris Veneman (Kahuna Racing) and Cup winner Gurecky came home in P6 and P7 respectively.

That’s it for 2021 in the Northern Talent Cup. Over seven rounds we’ve seen some incredible races and performances, as well as some impressive progress throughout the field. What will 2022 bring? Time will tell, but for now: congratulations to the class of 2021 on an impressive learning curve and entertaining season of competition!