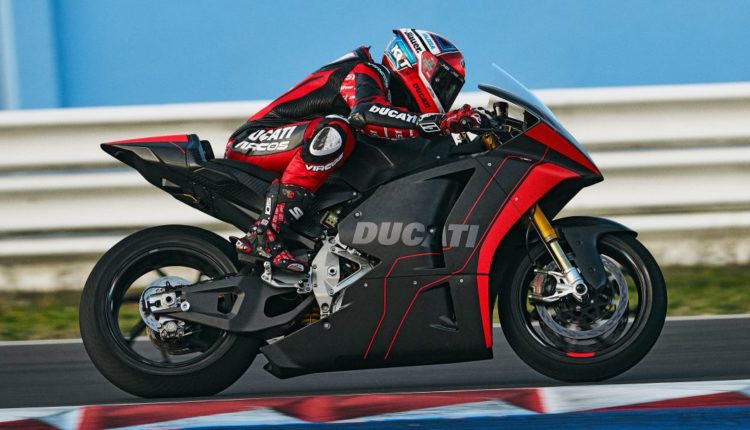 Ducati at work for the MotoE challenge. The new electric prototype on the track recently in Misano with Michele Pirro, here are the first photos.

The 2022 season will be the last with Energica, the single MotoE brand. From 2023 Ducati will take over, which is certainly not wasting time. Test driver Michele Pirro (fresh from his wedding with his partner Paola) recently carried out a few days of testing at the Misano World Circuit. The multiple Italian Superbike champion thus tested the technical characteristics and potential of the new electric motorcycle prototype, codenamed “V21L”. The Borgo Panigale house, with eight bikes in MotoGP starting next year, is also working hard to win the brand new challenge that awaits it shortly.

“The first electric Ducati on the track is exceptional not only for its uniqueness but also for the type of company.” So Roberto Canè, Ducati eMobility Director, comments on these first tests. Underlining that “We are certainly not finished, on the contrary, we got a long way to go. In the meantime, we have laid a first important ‘brick’. ” The tester Michele Pirro is no less enthusiastic, clearly an important part also towards the electric challenge. “Testing the MotoE prototype on the circuit was a great thrill. It marks the beginning of an important chapter. ”

He then added that “The bike is light and already has a good balance. Furthermore, the throttle connection in the first opening phase and the ergonomics are very similar to those of a MotoGP. If it weren’t for the silence and for the fact that in this test we decided to limit the power released to just 70% of performance, I would have thought very well that I was riding my bike ”. A first step in the future handover between the two Italian brands, an eye to the future in terms of eco-sustainable mobility.

WOMEN'S EUROPEAN CUP 2022: : UPDATE TO THE CALENDAR AND GREEN LIGHT FOR PRE-REGISTRATION