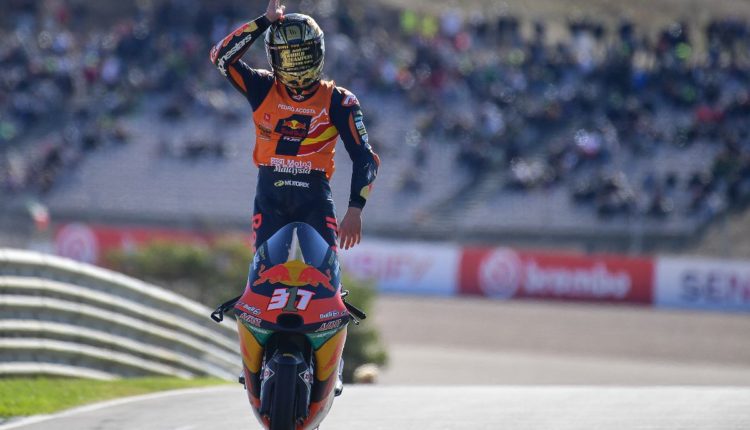 Pedro Acosta (Red Bull KTM Ajo) is the 2021 FIM Moto3™ World Champion! In a tense thriller at the Autodromo Internacional do Algarve, the rookie sensation sealed the deal with a win as sole remaining rival Dennis Foggia (Leopard Racing) hit some bad luck on the final lap. Acosta has led the standings since the second Grand Prix of the season – his incredible win from pitlane in Doha – and takes his place in history as the first rookie lightweight class Champion since Loris Capirossi in 1990.

Acosta’s ascent to the crown began at five years old when his family bought him a dirt bike. But it wasn’t quite love at first sight, although the young Spaniard did have an apt hero: Kevin Schwantz. And he did keep going, starting a path that would really take off in 2017 as he took the pre-Moto3™ title in Spain with two races to spare, starting to stand out.

He then moved into the FIM Moto3™ Junior World Championship for 2018, and had some solid finishes. But in 2019 his incredible ascent gained even more traction as he paired the FIM Moto3™ JWCh with his first season in the Red Bull MotoGP Rookies Cup. In the FIM CEV Repsol paddock he started running at the front and finished in the top five, and in the Rookies Cup he came overall runner up after a stunning first season in the series. Three wins and five podiums didn’t secure him the crown, but then came 2020.

Acosta was a force to be reckoned with in the FIM Moto3™ JWCh and came third overall, with three wins and five further podiums. In the Rookies, however, he was absolutely unstoppable. He won the first six races in a row and wrapped up the crown with two races remaining.

Making his debut in the Moto3™ World Championship in 2021, then, came with some hype. But that hype was outgunned in just two races: in the first he took second and debuted on the podium, just 0.042s off the win. Second time out, Acosta won. And somehow, he did it from pitlane.

It was a truly stunning race as the Spaniard was given a pitlane start and then emerged to take his first Grand Prix win, slicing through the pack lap after lap. In Portugal he won again, this time in a duel vs future title rival Foggia, and in Jerez it became three in a row. Goosebump-inducing greatness was the name of the game in his first four races, with history made nearly every weekend.

Three top 10s followed but Acosta was back on top in style at the Sachsenring, before only just missing out on the podium at Assen. Another win at the Styrian GP after an incredible duel against earlier season rival Sergio Garcia (MuchoNeaumatico GASGAS Aspar Team) cemented an incredible lead for the number 37, and another fourth in the Austrian GP added more good points.

A few tougher races then followed, including his first and only DNF at Aragon, but by the time the paddock arrived back at Misano for the Emilia-Romagna GP, it was match point time. Foggia was on a roll but the points were still very much in Acosta’s favour, and as the Italian won to keep the fight rolling to the Algarve GP, the number 37 was at least back on the podium in third – for the first time since his Styrian GP win.

And so the rollercoaster beckoned. Foggia vs Acosta had decided the Portuguese Grand Prix, and in Acosta’s favour, but everything was on the line at the Grande Premio Brembo do Algarve. 21 points clear, a race win would guarantee a title win, but Foggia was right in the fight at the front.

Starting P14 made life difficult for Acosta, but in true Acosta style, it didn’t take long for the number 37 to be fighting for the race lead. An epic, enthralling, and, in the end, dramatic encounter followed. Acosta dived up the inside of Foggia at Turn 3 on the final lap to take the lead. Unfortunately for Foggia, the Italian was then taken out not long after and lost the right to reply, with Acosta going on to claim victory and with it the 2021 Moto3™ title.

Acosta has been an absolute sensation in Moto3™ this season, and the World Champion has one more lightweight class race to contend before his Moto2™ adventure with Red Bull KTM Ajo begins. Congratulations, Pedro!