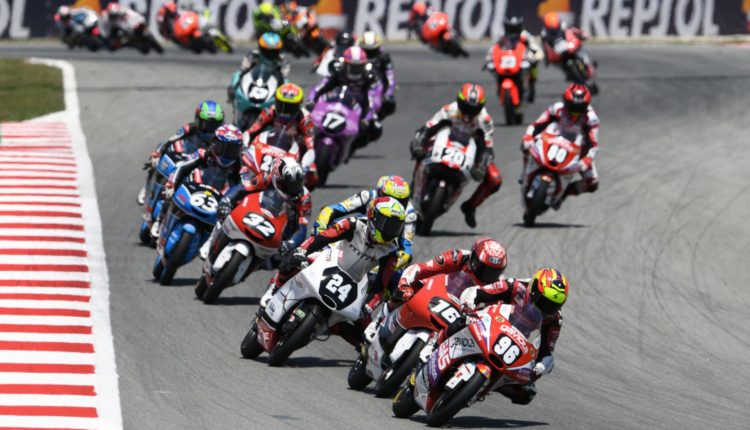 After more close competition for the 2021 FIM CEV Repsol at the Circuit de Barcelona-Catalunya, it’s time to gear up for Round 4 as the paddock heads for Portugal and the iconic Autodromo Internacional do Algarve. One race for the FIM Moto3™ Junior World Championship, two for the European Moto2™ Championship and one for the Hawkers European Talent Cup are sure to make Portimão another exciting showdown, with plenty on the line at the rollercoaster.

In the FIM Moto3™ JWCh, it remains Daniel Holgado (Aspar Junior Team) in the driving seat. It’s no longer a 100% record for the Spaniard but still four wins from five, and he’ll be looking to make that five from six. The usual fast suspects will be out to stop him, however: Ivan Ortola (Team MTA), David Muñoz (Avatel – Cardoso Racing), David Salvador (TM Racing Factory Team), Jose Antonio Rueda (Team Estrella Galicia 0,0), David Alonso (Aspar Junior Team) and more, all of whom are looking for their first victories of the campaign. Mario Aji (Astra Honda Racing Team) and Takuma Matsuyama (Asia Talent Team) have also been quick and the former remains on the hunt for a first podium, the latter a first win… and both have been close.

Scott Ogden (Aspar Junior Team) will also look to stay with that fight at the front as the Brit took his first podium in Barcelona, and Syarifuddin Azman (SIC Racing) will be one to watch. The Malaysian played his cards right at Catalunya to take a first ever FIM Moto3™ JWCh victory and join Holgado as a race winner in 2021. Can he keep that frontrunning form in Portugal?

For the Moto2™ ECh, meanwhile, there’s only one real question on the way in: can anyone stop Fermin Aldeguer? The Spaniard has a full house of wins in 2021 as he continues to prove a trophy hoarder and his domination gives him a 25-point lead in the standings. His Boscoscuro Talent Team-Ciatti teammate Alonso Lopez, who has nevertheless impressed on his move from Moto3™ machinery to Moto2™, will be looking to end his run after five second places in a row… and the rest of the field will be looking to take the fight to the duo full stop.

Lukas Tulovic (Liqui Moly Intact SIC Racing Team) leads the chase so far with three podiums from five, and his teammate Adam Norrodin is the next man in the standings with two rostrums to his name this season. Can they stick with the Boscoscuro duo? And can the likes of Xavi Cardelus (Promo Racing) and Dimas Ekky (Pertamina Mandalika SAG Stylobike EUVIC Team) take a step forward?

In the STK600 standings there’s plenty on the line too, with Alex Escrig (Fau55 Tey Racing) looking to hammer home his advantage after some impressive and consistent performances so far, coming home top STK600 machine every time ahead of teammate Ondrej Vostatek. Avintia Esponsorama Junior Team duo Kevin and Leon Orgis will be looking to consolidate their third and fourth overall too.

In the HETC there’s the closest battle at the top so far. Hugo Millan (Cuna De Campeones) leads the way by only seven points ahead of teammate Xabi Zurutuza, and Zurutuza arrives fresh from the top step in Barcelona. Fellow Cuna De Campeones stablemate Adrian Cruces is close behind too, 15 points off the top, as consistency continues to pay dividends in the HETC standings. Of the top five, only Zurutuza is a race winner, with the others who’ve taken a victory so far – Alvaro Carpe (MTFoundation-77), Brian Uriarte (Team Estrella Galicia 0,0), David Garcia (Finetwork Hawkers Junior Team) and Jacob Roulstone (Leopard Impala Junior Team) – looking for more consistency. Will the rollercoaster of Portimão deliver another HETC rollercoaster of a race? Tune in on Sunday the 4th of July to find out!