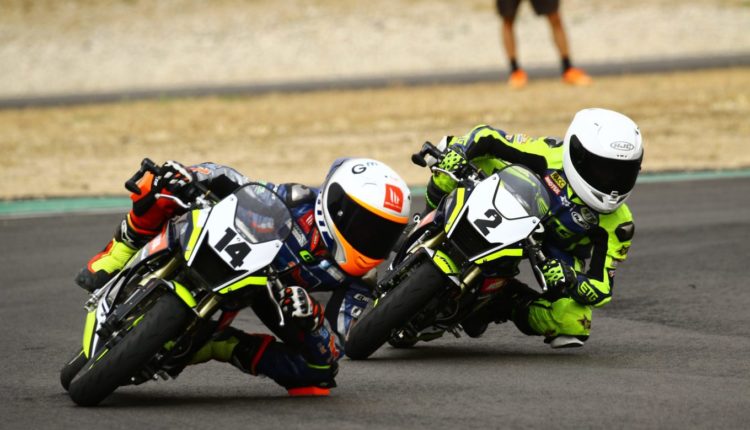 The second round of the RFME Mini Speed ​​Spanish Cup was held this past weekend at the Karting Campillos. The high temperatures that had been announced made an appearance and the almost 150 riders, their companions, organization, track commissioners, etc. suffered a lot, but they got the strength to finish the day and leave satisfied with the work done by each one of them.

Pablo Olivares was the fastest in the times of the FIM MiniGP Spain Series followed by Izan Rodríguez and Alberto Enríquez. With all the laps ahead, the same three riders from the qualifiers were the protagonists of the two races. In the first they crossed the finish line in the same position, being Olivares first, Rodríguez second and Enríquez third and in the second, Pablo won again, Alberto made second and Raúl Navarrete third, leaving Izan in fourth place. Thus, Pablo Olivares, Alberto Enríquez and Izan Rodríguez were on the podium.

The large number of riders enrolled in the Minimoto category, caused them to be divided into two groups. Finally, Jesús Pérez took pole, leaving Francisco Fernández and Nicolás Jiménez as second and third, respectively. In the first round of Group B, José Luis Cagigas crossed the finish line before anyone else, so Nicolás Fonseca had to settle for being second and Neyzan Coll third. But, in the second, Ricardo García won, Miguel Ángel González was second and Jairo Llao third. Álvaro Chichurri, Alberto Lyon Muñoz and Fermín Valero were the protagonists of the first round of Group A seeing the checkered flag before anyone else. In the second, Muñoz stole Chichurri’s wallet and won. Álvaro was second and Nicolás Jiménez third. Alberto Lyon Muñoz, Álvaro Chuchurri and Fermín Valero were the three riders who made it to the Minimotos podium.

Antonio Javier Portero was the fastest in the MiniGP 110 4T times. Antonio López finished second and David Demans third. López and Demans repeated their position in both sets, with Antonio the winner and David the second classified. But, in the first round, Portero joined as third and in the second Iker Rodríguez did. In the photography of winners were Antonio López, David Demans and Iker Rodríguez.Oscar Rueda as first, Karim Sánchez as second and Enzo Zaragoza as third.

Yeray Guerrero took pole in Moto5 and had Luis Miguel López and Oliver Cantos as companions on the front row of the grid. Controlling the race during all the laps, López won while Cantos, also running second always, saw the checkered flag behind Luis Miguel. Jacobo Hinojosa closed the top three. Oliver Cantos was the protagonist of the second sleeve. Yeray Guerrero finished second and Vasco César third. Thus, Oliver Cantos climbed to the first step of the podium, Luis Miguel López to the second and Vasco César to the third. The next test of the RFME Mini Speed ​​Spanish Cup will be held on August 7 and 8 at the DR7 Circuit.