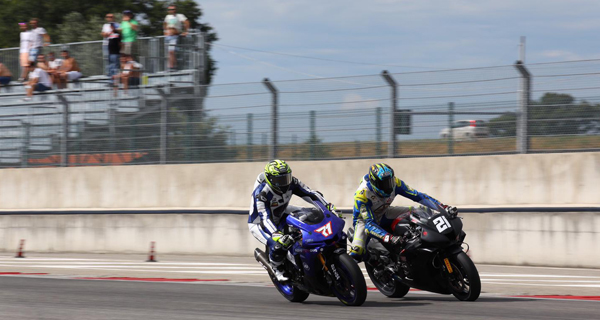 Entertainment and sunshine for the fourth round of the MP Exhaust MES Trophies, whose protagonists met on the Tazio Nuvolari circuit in Cervesina. It was a hot weekend, but not just for the temperatures. The battles on the track started in the morning, when the Supermono class opened the dance, which saw all the single-cylinder production on the market at the start. It has been brawling right from the start with homogeneous duels for each type of motorcycle.

Matteo Morri is right for the Supermono Open, after a good fight with Daniele Scagnetti. The two will play for the title in the last stage which will take place in mid-September in Cremona. The contest for motorbikes with Moto4 regulations was also beautiful, which once again saw Andrea Vitali dominating, but which saw a rookie Andrea Tomio close in second place. The Lombard rider brought the TDR 300 into the race, an interesting proposal that could have a wide use in the imminent future of the MES trophies.

In the 2 times the star of William Pisano shines ahead of Specolizzi for the open classification, while Emauele Magnanelli takes first place in the 125 Sp in front of Balboni.

Two races scheduled for the 600 open, where despite some defections, the show was not lacking. Dominating was Simone Saltarelli, able to stretch after a tight start, on a group which included Filippi, Ferrari, Gioia and Bianucci.

The Kawasaki rider was good at moving up to lead, imposing his pace from the third lap, which allowed him to reach the middle of the race with about three seconds on his pursuers, which in the meantime gave rise to an interesting brawl. Giacomo Gioia lost ground from the group, while a few laps from the end it was Filippi who left the game.

The place of honor was therefore played by Ferrari and Bianucci, with the latter having the upper hand with a nice slip a few curves from the finish. First place for the British Alex Murley in the stock.

Race 2 once again saw Saltarelli on the top step of the podium. The Greenspeed team rider with these 50 points earns the leadership of the championship, and will be in the best position to try to win the 2021 title in the last race.

Place of honor for Micheal Ferrari, who is confirmed as consistent on this track. Third place for Michele Filippi who started with high expectations already from Saturday.

Race 1 of the 1000 open even ended in photofonish, with Claudio Corti good at getting the better of Andrea Maestri. The driver from Como relied on his great experience, also managing to set the new track record in the race. Third place for Pasquale Moggio, who was also good at preceding the photo finish Massimiliano Palladino, after another exciting duel.Corti confirmed himself as the star performer of the day and repeated his success in race 2 too, after a spectacular duel again with Maestri, who replied to Como by setting the fastest race lap, the new official track record. In the end, however, Corti’s greater experience allowed him to be more effective and gain a small margin that he managed during the last few laps. In third place Luciano Bisconti passed alone, while Palladino in the final was able to stretch over Brugnone, who finished fifth.

The Race attack 600 was the scene of the battle between Luca Coletto and Davide Rolando. A battle that was decided only at the last lap, with the first one preceding the Piedmontese driver by only 7 tenths of a second. Third on the finish line was Simone Caccamo, who had the best in a three-way sprint on the young Marco Como and on Rudy Gaggiolo, who returned for a weekend on the other side of the wall. Gaggiolo is in fact the chief technician of the ParkinGO team engaged in the Supersport world championship. Alberto Bettella, sixth, was first in the challenge classification. In race 2 victory for Simone Caccamo, also good at taking advantage of Coletto’s exit. By sum of results, he is on the top step of the podium. Second on the finish line in the sprint Davide Rolando, a result that allows him to collect the trophy for the second position of the day, while Marco Como improves by finishing third in race 2 and thus conquering the necessary points to get on the third step of the podium. Alberto Bettella repeats the success in the challenge also in race 2.

The race Attack 1000 featured Jari Remoto, able to take advantage of the brawl between the two teammates of the Tecnica Moto team Lazzaro Valsecchi and the influencer Italian Black Rider, born Claudio De Stefano.The two standard bearers of Andrea Zappa’s team faced each other in the utmost fairness, but never backing down. The result was a nice brawl that kept those present with bated breath until two laps from the end, when Valsecchi left the scene, leaving the place of honor to his teammate, who thus crossed the finish line with a second advantage over Andrea Crifò, the his most immediate pursuer. Niccolò Pellegrinelli, on the other hand, preceded Alberto Torchio in the sprint, thus finishing fifth. Jari Remoto, who also monopolizing race 2 makes his success his own. In the second heat, Lazzaro Valsecchi crossed the finish line behind him, followed by Andrea Crifò. The fourth place on the finish line earned De Stefano the second position of the day, while Crifò climbed on the third step of the podium.

A show at the highest levels in the 300 class, where the former MotoGP rider Bradley Smith took the top step of the podium, after a good battle with Giuseppe De Gruttula, standard bearer of the Terra e Moto team in the CIV. The smile of the Englishman (now a permanent presence of the MES) on the podium leaves no doubt about how difficult the battle with the Italian was, at least when Conte’s fall did not help to separate the two. Third place for the increasingly surprising Niccolò Lisci, who preceded a large group of young people with high hopes, including Stefano Sala and Mattia Vignati who came to light today, taking fourth and fifth place respectively.The leader of the championship Davide Conte was eleventh, after the fall he was able to get the bike up and start again to earn the necessary points to win the championship with a race to spare.Alessio Trombin was the first of the challenge, behind him, detached, Matteo Cristini and Lorenzo Magnano.

Appointment for the next stage in mid-September on the Cremona racetrack.