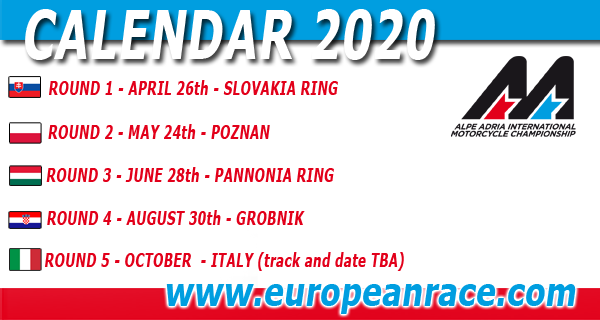 The wait is over. The calendar of the Alpe Adria International Championship is now official. SH Group, new promoter of the event has managed to conclude the negotiations with the racetracks that will host the 2020 event.

The championship will start on April 26th on Slovakia’s Slovakia Ring circuit. The second appointment will be in Poland, at the Poznan circuit and followed by a third round in Hungarian territory at the Pannonia Ring. The penultimate round will see the historical circuit of Rieja / Grobnic as protagonist and then the closing round will be held in Italy in October, on a track that will be announced only in the coming weeks

The 2020 registration forms will be available next Monday 23 December, here on our website www.europeanrace.com

For information: alpeadria@sh-group.it
Link to the FB page
Link to instagram page