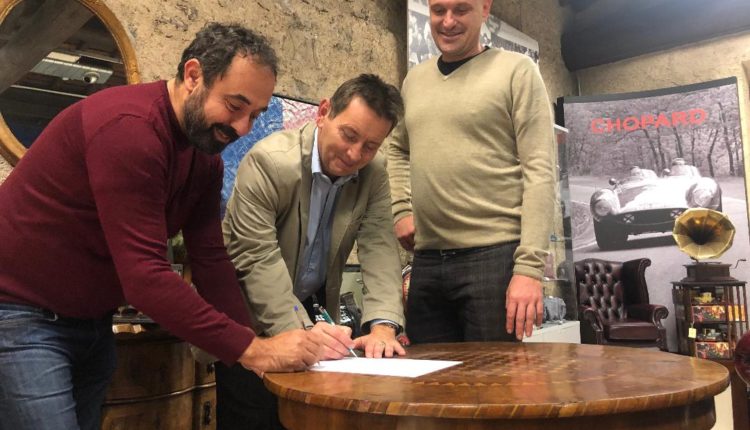 THE EXPERIENCE OF MOTOESTATE TO DEVELOP ALPE ADRIA INTERNATIONAL CHAMPIONSHIP

Sh Group, already promoter of the Wheelup Motoestate trophies, is pleased to announce the agreement that will bind the Italian company to the Alpe Adria International Motorcycle Championship for the next six seasons. An important agreement, which comes at the end of a long negotiation at the end of which the development plan and the experience of the Italian promoter were chosen by the Alpe Adria and by the federations that make it up to develop the mittle-European championship that takes place today and aims to expand its borders even at the western level.

Last weekend a contract was signed between the parties, which then entered into force today, following the meeting between the promoter, the FIM Europe and the national federations, which took place in Prague.

The goal of Sh Group is ambitious, it will work to widen the territorial boundaries of the championship and to improve the quality of the product, to be able to position it as a reference point for the teams that wish to compete on an international stage that ensures them an organized championship and structure, with clear regulations, battle classes and a high image return.

“We are very satisfied to have succeeded in defining this agreement – explains Bruno Sandrini – this is for us a starting point that will see us involved in a new and more ambitious continental challenge. Obviously we will continue with the organization of the Wheelup MES trophies at national level, which again this year have seen us grow by a further 14%, thus arriving at an average of 193 drivers per race. We are very courageous in meeting this challenge, both for the economic commitment that it requires, and for the work that awaits us, which is no longer committed to the national territory and which will require us to work closely with the national federations and create a network of collaborations in every country involved “

“The first news that we will introduce – says Filippo Delmonte – will be to bring back a stage of the championship in Italy, a country that saw the birth of this championship back in 1981. For this we are working on the calendar, which will be presented at the Vienna meeting of AAMU. Certainly this will not be the only news, we will go to intervene a little in all sectors, from regulations to communication to the competition format, to the categories. We will do it gradually, trying to accommodate as much as possible the evolution of the motorcycling market, today in a profound change “

Satisfaction also from Attila Nagy, president of AlpeAdria Motorcicle Union: “We have chosen the project of Sh Group for the freshness and the concreteness of its ideas. We will ensure maximum support especially in the start-up phase to try to develop a championship that we believe has great potential. We can boast three European-classed classes, the Superstock1000, the Supersport300 and the Supermono. This allows us to offer blazon titles and offer spectators an important level show “

THE NEW WEBSITE DEDICATED TO THE ALPE ADRIA IS ONLINE