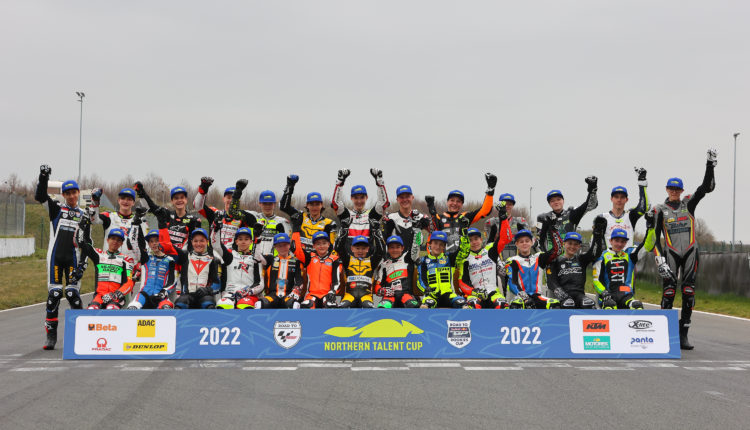 The third season of the NTC is about to begin, with MotoGP™ at Le Mans playing host

The Northern Talent Cup is geared up and ready to race in 2022, with Round 1 now just around the corner. The season starts on the biggest stage of the year, alongside MotoGP™ at Le Mans, with the class of 2022 suited, booted and ready to race – and Rossi Moor (Fairium Next Generation Riders Team) arriving in the crosshairs.

The Hungarian is the highest finisher who returns to the Cup in 2022, having ended the season third overall last year – with a good number of wins and some very impressive pace in his rookie year. He also took pole at Le Mans last year, and although bad luck and the difficult weather kept him from quite starting the year as he would have wanted, the speed was there. Will it remain so in 2022? He was fast once again in pre-season testing, but did also suffer a big crash, rider ok.

It wasn’t Moor who topped the timesheets in testing though, it was Dustin Schneider (Goblin Racing) top of the pile on both days as the German threw down the gauntlet early in 2022. He also won the race simulation with some impressive pace, so he’ll be wanting to carry that into Round 1. Fellow veterans Tibor Varga (Forty Racing), Valentino Herrlich (Busch und Wagner Racing Team), Loris Veneman (TeamNL Open Line) and Lennoxx Phommara (Team Phommara) also had speed at the Oschersleben test, and will be wanting to open their 2022 podium accounts first time out. Kevin Farkas (Agria Racing Team) could be a threat too; already a race winner last year.

Rocco Sessler (MCA Racing), meanwhile, was the best-performing rookie overall at the test, which is no mean feat as half the 26-rider field comprises new faces in 2022. Levin Phommara (Phommara Team) is one rookie who will be missing as he recovers from a crash in testing though. Can Sessler keep that mantle into and after Round 1, or will the very different layout of Le Mans shake up the field?