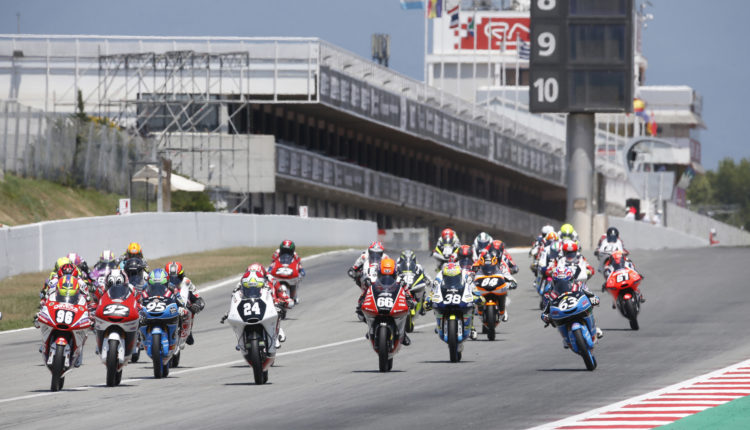 On a beautiful day at Portimao, the conditions were perfect, and the racing didn’t disappoint with close finishes and fierce action throughout. Fresh from his maiden pole position, Joel Kelso (AGR Team) clinched his first FIM Moto3™ Junior World Championship win in one of the closest finishes ever. Fermin Aldeguer (Boscoscuro Talent Team-Ciatti) extended his unbeaten run in the Moto2™ European Championship with a supreme double victory while Xabi Zurutuza (Cuna de Campeones) took his second win in a row to take control of the Hawkers European Talent Cup.

The FIM Moto3™ JWCh race was shortened to a 10 lap sprint after a crash involving Harrison Voight (SIC58 Squadra Corse) brought out the red flags. The Australian suffered trauma in both legs but was confirmed to be conscious following the incident. The restart came down a final lap duel with Joel Kelso recovering from an error at Turn 4 to snatch victory from Daniel Holgado (Aspar Junior Team) by just 0.005 seconds. Marcos Uriarte (Laglisse Academy) opened his account for the season in style, claiming his first podium in third, and today’s results have seen Holgado extend his championship lead to 69 points over Ivan Ortola (Team MTA) who fell to 12th after a late mistake.

All eyes were on Fermin Aldeguer in Moto2™ Ech and the championship leader lived up to the billing. The 16-year-old produced a dominant performance in Race 1, showing incredible consistency and speed to pull clear of team-mate Alonso Lopez (Boscoscuro Talent Team-Ciatti). Adam Norrodin (Liqui Moly Intact SIC Racing Team) equalled his career best result in third, taking advantage of a crash for his team-mate Lukas Tulovic in the early stages after the German had made a bright start from row two.

Race 2 was much more closely fought with Lopez signalling his intentions off the start line, immediately passing the polesitter. Despite many attempts, Aldeguer struggled to overcome his team-mate before a ruthless move on the penultimate lap saw him secure a seventh victory in succession. With the second Boscoscuro forced to run off track, this allowed Xavi Cardelus (Promoracing) to finish a career-best P2, just ahead of Lopez who now trails Aldeguer by 39 points in the title chase.

HETC provided more edge-of-the-seat action as the stars of the future lit up Portimao with a seven-rider leading group swapping positions corner-by-corner all the way to the end. After a tense final lap, Xabi Zurutuza held on for his second win of the season, a result which lifts him to the top of the standings. Brian Uriarte (Team Estrella Galicia 0,0) secured a return to the podium in second while a photo finish was required to decide third. Despite initially being classified fourth, Adrian Cruces (Cuna de Campeones) was awarded the place with Maximo Martinez (Team Honda Laglisse) missing out. With Hugo Millan (Cuna de Campeones) finishing sixth, Zurutuza now holds the points lead for the first time this season, eight clear of his team-mate ahead of the next round at MotorLand Aragon in three weeks.