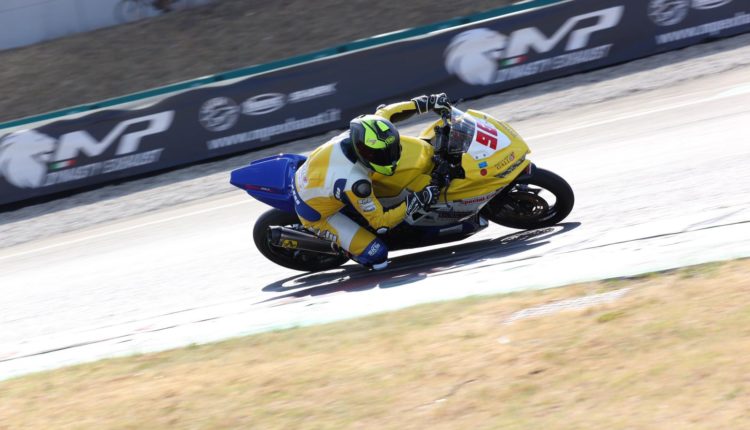 The third stage of the MP Exhaust MES trophies is dedicated to the memory of Verginio ”Pippo Stanga”. A memory that of the rider, frame builder and manufacturer of mufflers, but above all of the friend of the MOTOESTATE who was paid by exhibiting his MOTOPLAST endurance who has participated several times in the 24 Hours of Le Mans.

The 125 / Moto4 class opened the ball, with Vitali as the absolute star. The very young rider on his moto4 made a vacuum from the first laps, leaving the task of thrilling those present to Magnanelli, Balboni, followed by Specolizzi, fighting for the place of honor and to another trio composed of Agnorelli, Krsev and Chiarena, who gave themselves to each other for all 10 laps of the race, crossing the finish line in order.

Same script for the second of the scheduled races, with Vitali running away from the start with Magnanelli Specolizzi and Balboni finishing in the same order of arrival compared to race 1.

Daniele Scagnetti’s signing is once again on the Supermono, where the expert driver was right by Majola, in the race for the BDB classification, and by Matteo Morri, who therefore finished second in the Supermono. A result that allows Scagnetti to take the lead with just one point ahead of Morri. The podium of the category is completed by Fabio Piccolo.

Supermono who was in the categories today with 2 races scheduled. Daniele Scagnetti is still trying to set the pace, Matteo Morri tries to follow him, but Mattei and Piccolo don’t let go, involving him in a spectacular fight for second place. On the fourth lap Alessio Mattei falls, Morri takes advantage and stretches, so they remain to fight for third place Piccolo and Basso, who finish at the finish line in order.

It is then time for the first of the two races scheduled for the 300 Supersport, where 34 riders showed up at the start, with a large international patrol at the start. It is really a foreigner, the German Cristian Stages starting from the first box, followed by the championship leader Davide Conte and Alejandro Carrion.

It is a brawl at the start, with the first three of the tests also protagonists in the race, to which Bradley Smith is also added. The poleman Stages, imposes his law and runs away, taking advantage of the fight behind him. Behind it is a great blow, with Lisci and Lorenzini forced to retire when they were becoming protagonists of a great race. Applause also goes to the resident of the championship, Stefano Sala, Mattia Calonaci and the very young Davide Bollani and giacomo Zannoni who finish respectively from fourth to eighth place. In the Challenge Kawasaki 400 Matteo Cristini took the top step of the podium, followed by Magnano and Trombin.

As expected, the second of the races scheduled for the day for the 300 SS ClasseViva. The script seems to be that of race 1, but after a few laps the display of a red flag leads to a second start. Also this time it is Stanges who takes the lead, with Carrion, Smith and Conte following. The German stretches, while behind the three pursuers alternate in second place, until a lap from the end Bradley Smith decides to rely on his experience. He places his paw and holds the position until the end. Checkered flag under which Conte passes in third place. Bravissimo Niccolò Lisci, who despite the technical gap from the leaders was the author of a great race, which closes in fifth place. Still in the noble areas of the ranking Zannoni and Bollani, who continue their growth that sees them increasingly protagonists of the championship. In the Kawasaki Challenge another success for Cristini, who precedes Zulian and Magnano. Great show and great applause on the podium for these very young protagonists of two races to be framed.

lengthening from the first two corners and gaining an important advantage in the first two laps, which allows him to manage the race. His race demonstrates the confidence he has now achieved, which allows him to be incisive from the first meters of the race. Great applause also goes to Alberto Bettella who finished second after a nice fight with Lorenzo Voch, third. Also good Coletto and Como, whose race was conditioned by a small mistake, which ousted them from the fight for the podium. Same script in the second heat, with Liberini who, with his third victory in three races, seriously mortgaged the title. Who tried to oppose it was Coletto, who after a few laps had to give up. The fight for third place was tighter, from which Voch came out 2 laps from the end due to a crash. The winner was Bettella, who was right over Como and Rolando.

The www.4moto.it race attack 1000 was a land of conquest for Lazzaro Valsecchi. In a first heat which closed early due to the display of a red flag. Valsecchi was therefore the first to cross the finish line, followed by Remoto and De Stefano, growing race after race. In race 2 the victory is for the expert Alberto Torchio, who precedes Lazzaro Valsecchi and Jari Remoto. A result that keeps the standings open, Stefano, finished fourth at the finish line, despite not being able to start in race 1. Bravo De Stefano who finished in fourth place, while during the last lap a crash deprived Crifò of the positions of summit.

Even in the open class 600 the brawl is insured. Marco Marchelluzzo and Kevin Manfredì are the blazon wild cards in front of which Saltarelli, Bianucci and Ferrari and Pozzo fight like lions. Manfredi tries to escape, but Saltarelli doesn’t give up and keeps Marco Marchelluzzo behind for the first few laps. Behind them the trio with Ferrari, Pozzo and Bianucci is playing the prestigious positions. As the laps go by, the positions are consolidated in front, while the fight continues for fourth place. Manfredi thus obtains the success, while Saltarelli obtains a very important second place, detaching Marchelluzzo. Bravo Bianucci, once again among the protagonists, who preceded Fortunati, Gioia, Bocenti and the English Murley, who with this result leaps to the top of the Stock classification. In the last laps, Pozzo and Ferrari leave the scene, while Fortunati is the author of a great comeback that brings him to fifth position.