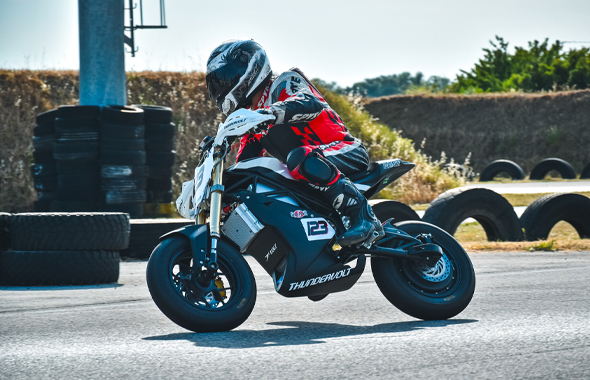 Capozzi dominates qualifying in the home race, Russo found, Rosetti is second of the day, Sala-roli wins two more and makes 100 34 degrees and a very hot weekend in Ferrara, which despite a light rain in the morning presents the drivers with a hot track. Second round of the “naked electric single-brand Italian Championship” in the ups and downs of the X Bikes, a track that on paper should have given few overtakes to the fast Thundervolts, on the contrary the emotions and duels were the common denominator of the two rounds of Ferrara where the riders challenged each other in a double heat of 13 laps. The presence, as a wild card, of the journalist Nicola Andreetto, better known as “Motoreetto”, is very welcome.

Departure from the first box for Capozzi who tries to impose his pace on the whole group of heads, composed of Russo and Salaroli really close and Zaramella and Rosetti just behind. After a few laps, also thanks to the hot day and the hot asphalt, “Capoz” falls, throwing the hopes of victory to the wind. A few laps later, again Loris Capozzi, forcing the pace to recover the leaders, widens the trajectory of the last corner and ends up off the track. The Race Direction is inevitably forced to suspend the race with a red flag to allow the marshals to clear the track of debris. Fortunately, “Rider and bike OK!” and Loris is back on the grid. It starts again after a few minutes with the first row formed by Salaroli, Russo and Zaramella. In the “restart” while Luca Borsetto also crashes at the third corner, the other Luca surprises everyone: Rosetti starts very strong putting Zaramella behind him, who in turn manages to prevail over Russo. Rosetti has such a convincing pace as to undermine the first position of the “usual” Salaroli, who still manages to cross the finish line first. RACE ORDER OF ARRIVAL 1 1 Alessio Salaroli 2 Luca Rosetti 3 Francesco Zaramella 4 Alessandro Russo 5 Marco Lo Iacono 6 Luca Borsetto 7 Cristian Cimatti 8 Loris Capozzi

Race 2 begins with a sling start from Loris Capozzi who for a couple of laps keeps everyone at a safe distance from the head of the race. The most insidious pursuer seems to be Alessandro Russo, who also started off with a great start from the grid and in great shape. Luca Rosetti, on the other hand, among the protagonists of Race 1, is forced to elbow in the rear and to set his race in “comeback mode”; same thing for Francesco Zaramella far behind compared to his standards.

As the laps go by, Alessio Salaroli, championship leader, finds the right pace and manages to pass Russo and engage in a spectacular battle with the “Capoz”. The duel between the two favors Russo who, joining up, forms a beautiful trio that will give strong emotions from then on to those present in the stands, still closed to the public but crowded with insiders, more and more intrigued by the electric world and by the very fast Thundervolt.

The race finale is forbidden to the faint of heart with Alessio Salaroli who manages to win and perform the second work of the day that guarantees him victory and primacy in the standings with full points: 100, the same achieved recently at the maturity exam by the very young driver from Forlì who never ceases to amaze at the start of the season.

“I really liked seeing the first three that after 13 laps arrived in a handkerchief and played it up to the last corner, the races of the Thundervolt Trophy are always beautiful” smiles Loris Reggiani, Project Manager “Now there we rest a few days and then we prepare the double challenge in Cascia, in Umbria, in a month and a half, in the meantime the riders will go to train to get back even more competitive and aggressive even if they are a really good group and in the paddock you can always breathe a ‘ calm and relaxed air ”