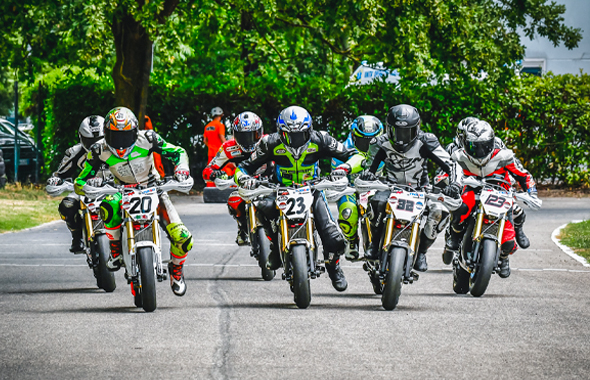 Capozzi finds his first win of the season in race 1, Rosetti in great shape throws away the chances of winning race 2, the “usual” Salaroli takes advantage of it.

An ideal climate for the third stage of the Thundervolt Trophy, scheduled for the weekend at the Umbrian “Le Querce” circuit for the double round of the Italian electric minimoto Championship. The drivers challenged each other on a dry track in two heats of 10 laps each. We note the presence of the wild card Matilde Contri, from Prato.

From Pole Position Loris Capozzi sprints like lightning, immediately followed by Rosetti and Salaroli, just behind them, Cimatti, Lo Iacono and Zaramella. Outside, Cristian Cimatti tries to be seen but bends over the dirt and loses the rear. He goes back up and starts again last, giving way to the opponents from the group of pursuers. In the second lap Borsetto overtakes the wild card of the day Matilde Contri who unfortunately falls at the first corner of lap number 3, while in front the detachment in the leading trio is practically nil: Rosetti tries to pass “the Capoz” several times, which re – responds blow for blow. Salaroli is tired of being a spectator in the brawl between the first two and on lap 8 perhaps he forces the overtaking a bit by hitting Rosetti and making him fall back to 5th position; instead luck smiles to Alessio and manages to stay in the saddle, but without being able to hinder the splendid race of Loris Capozzi who can finally rejoice for the first victory of the 2021 season. The other “first time” is that of Marco Lo Iacono who climbs on the podium behind Salaroli (2nd) and just 9 cents ahead of Luca Rossetti’s comeback (4th).
The fastest lap of race 1 is for Alessio Salaroli in 53,300, on the 4th lap of the race.

This time the fastest of all is Luca Rosetti, who decides to get in front right away to remedy the disappointment of race 1. The race proceeds at a not very high pace, obviously the pi-loti are kept a couple of tenths in the pocket to spend in the last few steps, so the leading group remains compact until almost the end. After a few laps Capozzi breaks the delay and tries to take the lead, Rosetti replies to overtake and Loris ends up on the grass also facilitating the overtaking of Salaroli who thus takes him to 2nd position.
The first three of the grid try to escape, even if the constant overtaking to win the lead makes them reach a few laps later by the “Cimatti group, Lo Iacono, Zaramella”. The result is a big group of six drivers (enclosed in just 1 second) with Luca Rosetti who remains firmly in the lead of the pace in front of everyone. Leadership that lasts up to two laps from the end where Salaroli decides to put himself in front of everyone, without however having to deal with Capozzi (3rd) who plays the “pass of the year” card overcoming both Luca Rosetti in one fell swoop that Salaroli. Last lap: this time the enthusiasm leads Rosetti into error who, losing the front, hits an innocent Capozzi, knocking him out and throwing every hope of victory for both of them. Salaroli benefits from this as he crosses the finish line in first position for the fifth time in six races. Loris Capozzi still manages to finish 4th, behind Cristian Cimatti and Marco Lo Iacono while Luca Rosetti, completely unmotivated, closes in last position.
Congratulations to Luca Borsetto, who after a month of forced stop due to injury, showed up still limping only on Sunday for qualifying, however, lapping on respectable times.
A special applause also to the “pink note” Matilde Contri (Wild Card) who despite her very little experience on the NK-E / R, has constantly lapped on times very close to the others that denote her great determination and speed.

Next Round: 18-19 September Ortona