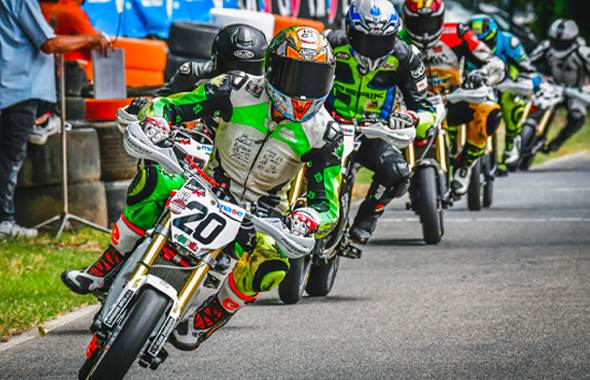 The unthinkable happens in Round 4 of Ortona, with two new winners: Cristian Cimatti in race 1 and Luca Rosetti in race 2

Thriller at the start, when the bike of the leader of the classification Alessio Salaroli seems not to want to leave and, of course, forces the nineteen year old from Forlì to start from the pits.

After the Pole on Saturday and the best time also in the WarmUp of the morning, the revelation of the day Cristian Cimatti also takes the lead from the first corner. And there is nothing left for anyone. He imposes his pace, unsustainable for everyone, which leads him to close the first passage already with an advantage close to the second over Luca Rosetti, behind which we find Loris Capozzi, Marco Lo Iacono, followed in turn by Luca Borsetto and, more late, Alessio Salaroli himself who was trying a desperate run-up.

The race thus becomes a solo, on the second pass Cimatti’s advantage is already beyond the second and Capozzi overtakes Rosetti, trying to lead the now desperate run-up.

On lap 4, the advantage remains on the second and Luca Borsetto crashes at the exit of turn one, while Rosetti begins to annoy Capozzi for the second position; Lo Iacono is watching them closely, a sign of a great improvement.

Lap 8, first detached, Rosetti enters decisively on Capozzi but exits wide, Capozzi comes out stronger and at the following braking he replies by recovering the second position by closing the door from the outside, Rosetti is forced to brake more than necessary to avoid the rear wheel of Capozzi and loses a lot of ground.

It seems over but it is not, while Cimatti is now unreachable, Rosetti pushes hard to get back in touch with Capozzi, he succeeds at the very last lap and with a pearl at the entrance of the last corner he wins the second position. Lo Iacono finishes 4th but very close, then Salaroli and Borsetto.

Worth noting is the forfeit of Francesco Zaramella injured in the first qualifying round of the minibikes OpenB.

Good even if unfortunate the performance of Alessio Salaroli, who also started with an injured foot, after-effects that had left him a fall in Saturday’s practice.

This time the fastest of all, from the center of the front row is Luca Rosetti, behind him Loris Capozzi and then Cristian Cimatti who precedes Marco Lo Iacono, Alessio Salaroli, Luca Borsetto and Francesco Zaramella (who decides to start for race 2 after the retirement due to injury before the race1).

At the start of the 2nd lap the first three are already taking a slight margin, while for the 4th position Salaroli overtakes Lo Iacono inside turn 1.

For a couple of laps Cimatti tries to pass Capozzi in every way but Capozzi closes all the holes well until shortly after halfway through the race Cristian makes a mistake due to his enthusiasm and ends up on the grass, losing a long way.

In the same passage Alessio Salaroli runs into a frightening fall, with the carom of the bike that ends up destroyed, while the Rider luckily comes out unharmed.

Towards the end of lap 6 Rosetti makes a mistake and Capozzi takes the lead, but the driver from Forlì does not give up, he follows him like a shadow and on the very last lap, with a manual maneuver, he passes it, winning the race and of the day.

At the end of the race, Borsetto will also run into another crash, in an attempt to regain the position that Zaramella had previously stolen from him.