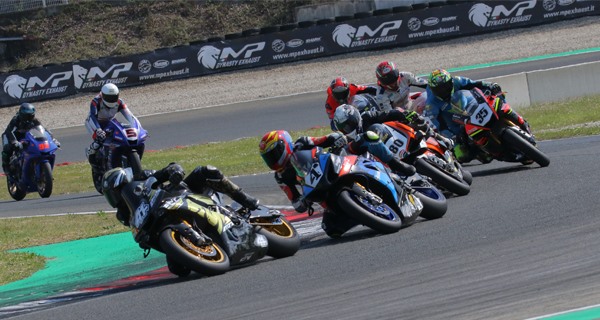 The MP Dynasty Exhaust Motoestate Trophies provided emotions in the two events so far run. There was no lack of brawl on the track, just as there was no lack of protagonists and full grids. Colorful and populated paddock, with experienced riders and young promises. In the midst of all this, internationally renowned riders such as Bradley Smith and Claudio Corti, as well as foreign riders: Frey, in the Supermono, and Alex Murley, a rider who also played in the Supersport world championship. In Cremona there was no shortage of illustrious wild cards: Salvadori, Perotti, Goi to name a few.

Now, after a brief flashback, the spotlight shifts to Round 3 of the season. We return to the Varano circuit on 26 and 27 June. And another crowded weekend with a high adrenaline coefficient is expected. On the banks of the Ceno river, the 125- Moto4- 300 Classe Viva and Supermono classes will race in double rounds.

Important opportunity to get many points, in very short rankings at the moment. Sold out is expected in the 300 SS ClasseViva. After two full races, another full grid is expected and many riders looking for glory, ready to try to take points away from the leader Davide Conte, riding the Dunlop-fitted Kawasaki.

125 / Moto4 the entry level category of the tournament, which sees the 125 SP and 125 Open on the track, all strictly two-stroke, and the Moto4, with 250 4-stroke engine capacity and restrictive rules. Both categories focus on technical balance to bring out the qualities of the drivers. In 125 sp the lead is Balboni ahead of Magnanelli and Agnorelli Matteo. In the Open the leader is Specolizzi. While in Moto4 the Dancers lead in front of Vitali, both young people with high hopes. The first at his debut on 17-inch wheels and the other already titled, at his debut last year in the 300. In the Moto4 the Aprilia 250s are also accepted this year, a good training opportunity for the riders who race in riding the bike from Noale.

Another category that will run the double race is the Supermono. The category that groups bikes from 250 up to 800, with rankings between Open and up to 450, in these first two rounds has highlighted very strong riders. Morri with Bucci Moto3 bent Scagnetti in Cremona, taking revenge from Varano. And with them, Raimondi is in a fight. Then there are the Pre Moto3 riders who use the Supermono for training and give beautiful tussles. You can participate in the category from 14 years upwards, while from 13 years old for pilots already registered in Civ Premoto3.

Double race, but it is a cult of the www.4moto.it Race Attack 600 and 1000 which again this year, since 20214, takes place all on Sunday. Two rounds, two race heats and four Dunlop D212 tires available. Ideal for those who want to run and have fun, with a level within everyone’s reach and lots of show on the track with two sprint races. In the 600 the young Liberini is in command, while in the 1000 the leader is Yari Remoto.