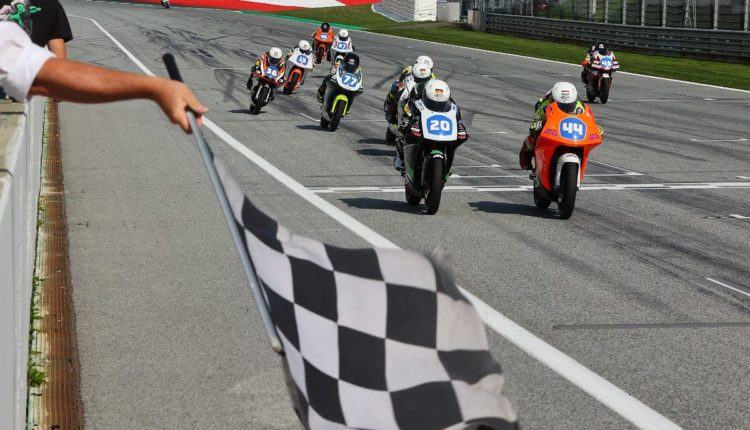 Rossi Moor (FAIRUM Next Generation Riders Team) is the 2022 Northern Talent Cup winner! The Hungarian put together an impressive season of wins and visits to the podium, ultimately sidelined from the finale but his lead proving just enough. Second overall in 2022 after likewise proving unable to take the race starts in Spielberg is Kevin Farkas (Agria Racing Team), whose late season charge was something to behold.

German rider Dustin Schneider (Goblin Racing) secured third overall, showing great progress throughout a season that also saw him take his first win. Congratulations to our top three, and to all the class of 2022!

Tibor Varga (Forty Racing) is now a Northern Talent Cup race winner! The Hungarian came out on top in an incredible race to the flag to take victory by just 0.013, with Dustin Schneider (Goblin Racing) forced to settle for second after a duel round the final corner. Valentino Herrlich (Busch und Wagner Racing Team) completed the podium, just winning his own drag to the line against Martin Vincze (Chrobak Motorsport Egyesület).

As the lights went out it was Matteo Masili (FAIRIUM Next Generation Riders Team) who took the holeshot, with Jurrien van Crugten (BB64 Academy), Schneider and Varga slotting in, but the number 44 was quick to strike for the lead. Initially it was a group of eight, but by Lap 4 five riders had broken away slightly.

That didn’t last too long, with another freight train forming at the front. Meanwhile there was another race within the race as Loris Veneman (TeamNL OpenLine), van Crugten and Lennoxx Phommara (Team Phommara) all had double Long Lap penalties to take, with all pushing to try and move through. Veneman and van Crugten got right back in the fight at the front, able to get back into the group before the final laps.

In the end it all came down to the final couple of corners, in classic Red Bull Ring style. Race leader Varga came under attack as Schneider sliced through on the inside and Herrlich even thought about the outside, but that didn’t work for number 10. He lost out slightly as the race came down to Schneider vs Varga on the drag to the line, with the number 44 tucked in tightly. And it proved just enough as he took his first NTC win by just 0.013 ahead of Schneider.

Herrlich held onto third ahead of Vincze, with Veneman and van Crugten slicing back to take fifth and sixth, respectively. Masili took P7 ahead of Julius Coenen (Helena and Julius Racing), with Kilian Holzer (HK Racing) and Maxime Schmid (Team Schmid) completing the top ten.

Holzer bolts for victory in five-lap sprint
The Austrian takes his first win on home turf, rounding out the season in style as the final race is shortened to a five-lap sprint

Kilian Holzer (HK Racing) put in a stunner on Sunday to become the second debut winner of the weekend, taking victory by over a second in a tricky Race 2 at the Red Bull Ring. After rain stopped play and the restart was set at five laps, it was a sprint for the finish and the Austrian took the home glory. Jurrien van Crugten (BB64 Academy) took second in a close battle for the podium, with countryman Loris Veneman (TeamNL OpenLine) classified third after a penalty dropped Race 1 winner Tibor Varga (Forty Racing) back in the top ten.

Veneman took the holeshot before Varga took over in the lead, but it was a tentative first few laps as the riders got to grips with the conditions. A lead group of six formed with the podium finishers joined by the likes of Valentino Herrlich (Busch und Wagner Racing Team) and Lennoxx Phommara (Team Phommara), but Holzer was on the march.

and by the final lap the front group had a very definite leader: Holzer. The Austrian put pedal to the metal and kept it near-perfect to the flag, taking his first victory in style and proving the master of some tricky conditions – leaving the fight to complete the podium squabbling in his wake.

That squabble saw van Crugten come out on top as a three-rider train of he, Varga and Veneman crossed the line in that order, but Varga was given a Long Lap that turned into a three-second time penalty for causing a crash earlier in the race with Brno JRT rider Michal Prokes. So behind Austrian home glory, it was a Dutch 2-3.

Julius Coenen (Helena and Julius Racing) took P4 ahead of Herrlich, with Tom Kuil impressing next up. Varga was classified seventh, with Schneider eighth in the race. Rocco Sessler (MCA Racing) took P9 ahead of Julius Frellsen (Frellsen RR) completing the top ten.

That’s it for the 2022 Northern Talent Cup, with Moor taking the title and Farkas confirmed as runner up, eighth place was enough for Schneider to take third overall – by just two points ahead of Veneman. Join us for more in 2023 and stay tuned to see where the Road to MotoGP™ leads next!