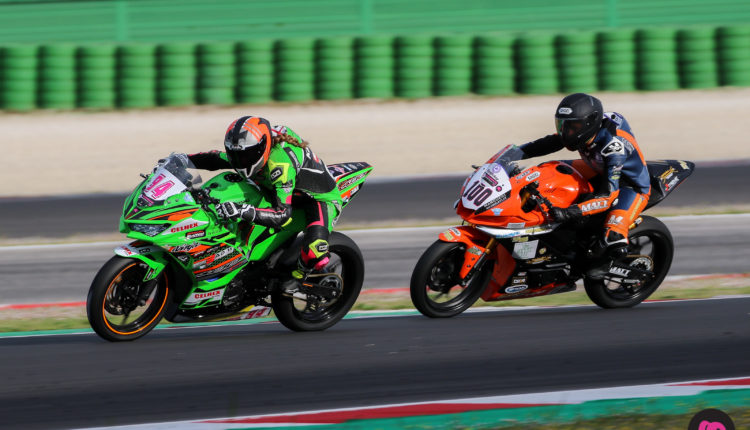 MISANO ADRIATICO – The inaugural round of the Women’s European Cup took place at the Motor Bike Expo Grand Prix on April 2-3 at the Misano World Circuit “Marco Simoncelli”. The season opener of the female european championship saw the South African sensation Jessica Howden dominate her debut race in the series. It marked a historic beginning for the WithU 511 Racing Team as well: thanks to Howden’s outstanding performance, the newly-founded all-female squad claimed its maiden win at its debut in a championship round. Reigning champion Beatriz Neila Santos (Team Trasimeno) and Sabrina Della Manna (Racestar), both on Yamahas, respectively finished 2nd and 3rd.

The 20 starters of the first race of the 2022 Women’s European Cup battled it out on the wet asphalt of Misano, whose conditions rapidly evolved throughout the race. Jessica Howden, who started 5th, wrestled her way to the top, showing off an unmatchable pace over the course of the 10 lap-race. The 18-year-old from South Africa, making her debut in the series riding a Kawasaki, managed to build a gap of over 7 seconds in the seventh lap in mixed conditions, as she immediately got past Beatriz Neila Santos.

The Spaniard struggled at the beginning of the race, but she successfully recovered in the closing stages. The reigning champion, who slipped into the field after starting from pole, managed to recover in the closing stages, as she fought hard with Sabrina Della Manna and Sara Sanchez. Neila Santos managed to overtake both for P2 on the final lap, snatching the fastest lap (2.02.473) as well.

Sabrina Della Manna, third in the race and fourth in qualifying, closed the race weekend on a positive note after proving to have pace to fight at the front. Sara Sanchez, very quick in qualifying and also involved in the CIV races during the weekend, had to settle for fourth at the end. Fifth place for Roberta Ponziani (Yamaha – Motoxracing), very competitive throughout qualifying and the race.

The Italian had the upper hand in an exciting duel with Isis Carreño (Kawasaki – GP3 AD11), sixth at the finish, and Neila Santos halfway through the race.Sara Cabrini (Yamaha – Team Trasimeno) crossed the line in seventh but shone bright in the wet in the first half of the race, climbing up to P2 at some point. Martina Plenario (Kawasaki – Runner Bike) precedes Anna Mercuri (Yamaha – Officina Dei Talenti), respectively in eighth and ninth position in the classification, while the Israeli Ran Yochay, making her debut in the championship, rounds up the Top-10. Eugenia Deluigi (Yamaha – VM Racing Team) also yields a point-paying result, eleventh ahead of Beatrice Barbera. Aurelia Cruciani finds herself further off, as she had to settle for thirteenth place ahead of rookie Cristina Zambrini (Yamaha – 44 Racing Team) and Arianna Barale (Yamaha – VM Racing Team). The young rider from Piedmont takes home the last available point at the end of a race that was compromised from the beginning due to a crash in the formation lap.

The Women’s European Cup will arrive in Spain for the first time, at the “Ricardo Tormo” Circuit in Valencia on April 23-24, where the second of six rounds will take place.

THE SPANISH SUPERBIKE CHAMPIONSHIP IS READY TO KICK OFF