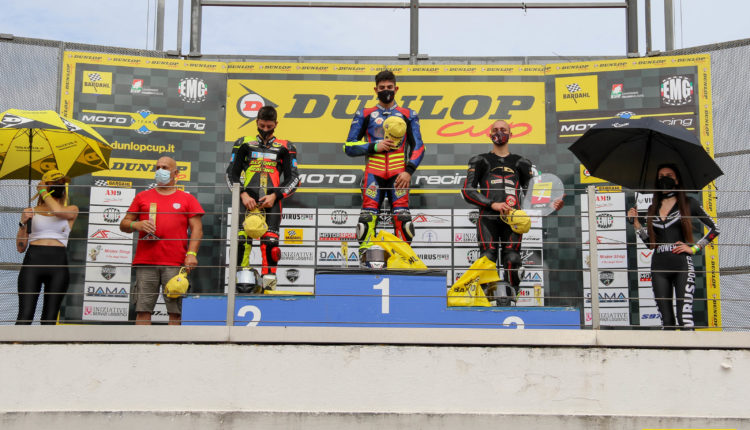 DUNLOP CUP 2021: HERE THE RESULTS OF THE THIRD ROUND IN VALLELUNGA

weekend just ended in Vallelunga, home of the third round of the Dunlop Cup 2021, has

given as a now customary show and twists. The weather, threatening to

rain since free practice on Friday, has instead spared the Lazio circuit,

despite a constantly cloudy sky to frame.

Round 3 saw as the main sponsor of the event Mister Shop King, a site dedicated to

online sales of technological products, and being the only single race challenge of

Championship, was characterized by the doubled allocation of points up for grabs.

In the 600 category Travagliati Giordano led the race alone, cutting the

finish with an advantage of almost 18 seconds over his pursuers: being however registered in

quality of wild card (and therefore invisible for the purposes of the classification), the rider of the Kawasaki team

MRT Corse & 2R leaves the 50 points due to the winner to Tocca Diego, first among the PROs.

increasing the gap: in fact, the current lengths are 106, 34 more than the second

Matteo (Alfonsi Racing Yamaha), who thanks to the best-lap scored in the race in 1’43.363 (the only

second place in the Championship at an altitude of 75. Fourth place for Giorgio Besana (Seven Team

Another wild card stands out in the 600 ROOKIES: Faraci Sebastiano has in fact won the comparison with the

rivals for just over a second, but it is the poleman Niccolò Sighieri who wins the first

place of the heats: after the unfortunate weekend in Mugello, the athlete of the Alfonsi team

Racing Yamaha flies to 72 points in the standings, at -27 from the leader Filippo Guadagni, second al

end of the race and creator of the category best-lap in 1’45.378 with the team’s Kawasaki

Puntomoto Racing. Complete the podium Airoldi Fabrizio Stefano, who reaches an altitude of 65 in

third victory in three rounds complete with a fastest race lap in 1’38.608, the team driver

Yamaha MotoXracing travels with full marks with 115 lengths. Even the

gap in the standings from Scienza Nicola, first of the pursuers, is 55 points; the rider of the

In fact, the Skimoto BMW team failed to go beyond 6th place to the “Piero Taruffi”.

Saltarelli Simone (Ducati TCF team), after an exciting duel, must be satisfied

of the second position: however, being wild-card for the occasion, he gives up the place of honor (e

then the 40 points) to Pelizzoni Diego: the Primera team bishop Liebre Suzuki thus catches the

third place overall with 59 total points. Fourth on arrival is the 2020 winner Zerbo

Sebastiano, on his return to the track with the Suzuki of the Race Mania team. Fifth place for

Excellent performance by Cantile Salvatore in the 1000 ROOKIES: for the Campania player it is the

first success of the season, topped off by a fastest lap of 1’43.558 with the team’s Yamaha

Massimiliano Cavicchioli loses the first place in the overall standings, only 15th on arrival at

due to a crash in the warm up lap that forced him to recover: the leadership

passes to Giacomelli with 86 lengths, followed by Cantile with 74 and by Cavicchioli himself a

THE NORTHERN TALENT CUP SADDLES UP FOR THE SACHSENRING