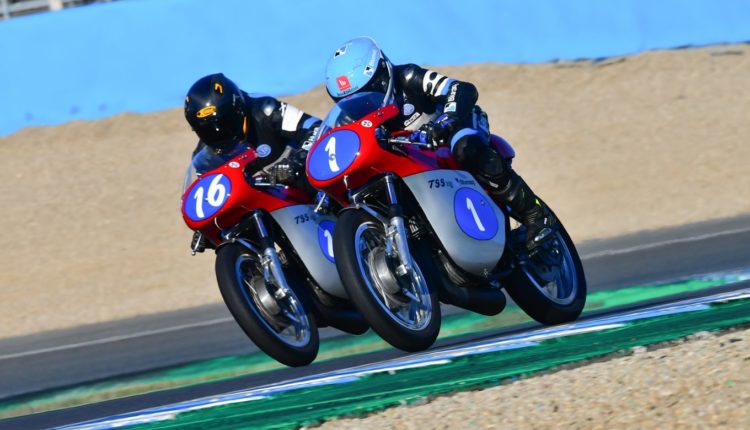 The Circuito de Jerez Ángel Nieto hosted the last tests of the Spanish Classic Speed ​​Cup and ESBK Legends last Saturday. There was no better setting than the Andalusian track to conclude a very exciting season with riders who have always given their all, a good number of participants gathered and thus closed the 2021 season, but they are already waiting for the  2022’s.

Sergio Fuertes celebrates his title with an amazing victory
The first timed practice session of the classics saw Sergio Fuertes as the fastest followed by Vicente Arnau and Miguel Cortijo. In the second heat, it was Javier Triguero who took pole, leaving Fuertes himself second. Cortijo closed the top three again. With these results Javier started from P1, Sergio from P2 and Miguel from P3.
After a good fight between Javier Triguero and Sergio Fuertes, the latter took the victory in the race. He thus ended the year in the best possible way, on the top step of the podium and celebrating the title won in the previous race, reaffirming once again why he is number one. Miguel Cortijo saw the checkered flag second and Vicente Arnau third.

Serrano, Cabanes, Hernández and Peru, champions of ESBK Legends
Víctor López, Jonathan Gordillo and David Chumillas managed to stop the time trial with the best times in the first series of time trials while in the second the pole went to Gordillo with Enrique Fernández and Joan García second and third respectively. With the combination of the two practice sessions, Víctor López started from the first position, Gordillo from the second and Fernández from the third.
The race saw a Victor in the lead during all laps and he won with authority. Behind there was more struggle, especially between those who competed for the other steps of the podium. After the six laps, Enrique Fernández finished second and Juan Ramón López third.

Now we just have to wait until next year for a new sparkling season.

FIM CEV REPSOL: TWO TITLES UP FOR GRABS AT THE VALENCIA FINALE