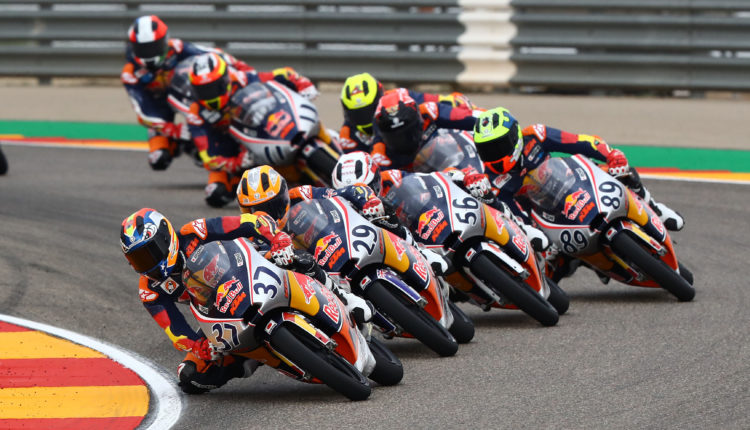 That last corner, the late braking, the multiple lines, fast in slow out, too fast out, track limits. So many thrilling Red Bull MotoGP Rookies Cup races at Motorland Aragón have been decided there on the final lap.

Traditionally the Cup season has ended here but with the cancellation of the GP in Finland the Rookies season will now end in Valencia. So there are still 4 races and 100 points to be contested.

So while 16-year-old Spaniard José Rueda’s 19 point lead over 17-year-old Dutchman Collin Veijer is enviable, any of the top 9 in the points table can still win the Cup.

Rueda has proven himself well capable of consistently high scoring with 3 wins, 6 podiums and only a single race of the 10 run to date where he finished outside the top 10. That was 11th in the wet Race 1 in Mugello, a race where anyone who finished did well.

So our Cup leader is hardly prone to errors but then neither is arch rival Veijer who was 15th in that same wet race, also his lowest result of the season. He has 2 wins and 5 podiums on his 2022 score card.

If those two lose their way in the remaining 4 races then there are those who will make the best of the situation. Angel Piqueras, the 15-year-old Spaniard, is very much on form with 2 wins and a 3rd in the last 3 races.

Thai 21-year-old Tatchakorn Buasri bounced back from injury with a 3rd and a win in Spielberg and Màx Quiles, the 14-year-old Spaniard, while inconsistent is already a double winner and only lost the win last time out when he exceeded track limits at the final corner.

All for the win

Those three may not consider that they have a great chance of making the points to wrest the Cup from Rueda and Veijer but they are certainly out to win races.

The rest of the field have yet to stand on the top step but Rico Salmela, Harrison Voight, Luca Lunetta, Casey O’Gorman and Filippo Farioli have all made the lower steps and have their sights set on at least one win before the end of the year.

So when it comes down to jostling for slipstreaming position down the back straight on the final lap, the plan is not so much to lead into the last corner but to lead out. Pick your favourite, keep your fingers crossed and shout at the action on europeanrace.com